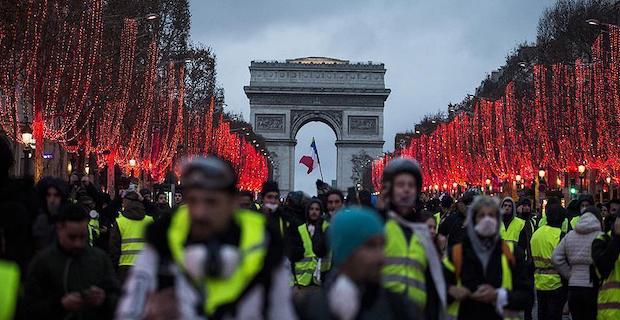 Speaking to French broadcaster TF1 on Monday, Edouard Philippe said the government cannot accept people who participate in the protests to show violence.

He further stressed that France will support a "new law punishing those who don't respect the requirement to declare [protests], those who take part in unauthorized demonstrations and those who arrive at demonstrations wearing face masks."

Since the Yellow Vest demonstrations began, 5,600 were arrested and more than 1,000 were sentenced to prison, said Philippe.

The French premier asserted that 80,000 members of security forces will be deployed at the countrywide protests to take place Saturday.

The Yellow Vest protests, which started as a reaction to fuel tax hikes and evolved into a protest against French President Emmanuel Macron, have continued despite the government’s call for them to halt.

Demonstrators held protests blocking roads and traffic, and also blocked the entrance and exits to many gas stations and factories across the country.

The protesters, who generally live in rural areas due to high rents in the cities, have called on Macron to cut fuel taxes and ease their economic difficulties.

Under pressure from the protests, Macron announced a raise in the minimum wage and also scuttled controversial fuel tax hikes.

At least 10 people died and more than a thousand others were wounded in the protests.

*Beyza Binnur Donmez contributed to this story from Ankara

Keywords:
French Prime MinisterEdouard PhilippeFrance PM
Your comment has been forwarded to the administrator for approval.×
Warning! Will constitute a criminal offense, illegal, threatening, offensive, insulting and swearing, derogatory, defamatory, vulgar, pornographic, indecent, personality rights, damaging or similar nature in the nature of all kinds of financial content, legal, criminal and administrative responsibility for the content of the sender member / members are belong.
Related News