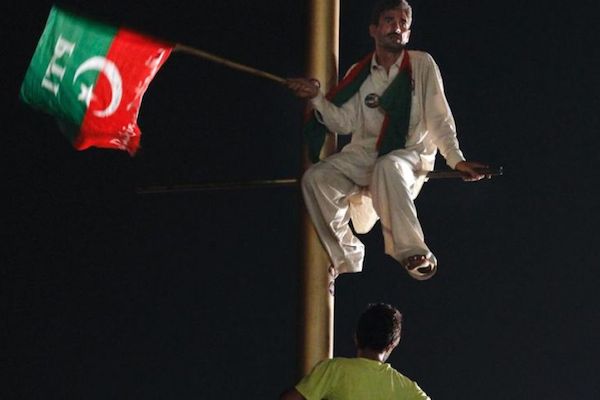 Dozens of Pakistani protesters were reportedly injured after riot police used teargas and rubber bullets to disperse thousands of opposition marchers who ran over barricades late Saturday night to reach the prime minister's residence to ramp up pressure on the government to step down. Angry mobs broke the external gate of the parliament house as clashes between protesters and police were continuing as of 20:45GMT on Saturday. Police fired teargas shells and rubber bullets to stop scores of angry supporters of firebrand preacher Dr Tahir-ul-Qadri’s Pakistan Awami Tehrik who marched towards the prime minister's house and the cabinet building. Thousands of party supporters, many of them wearing gas masks and holding sticks, were repulsed by the outnumbering security forces who reportedly used teargas and rubber bullets. Dr. Ayesha Ahmed, a spokesperson for Pakistan Institute of Medical Sciences, told reporters that 65 injured people including 8 policemen and 15 women were brought to the institute's hospital. Dr. Khurram Ghummal from Polly Clinic said that over 70 injured, mostly stable, were brought to the hospital. He said the injured included two policemen who received bullet injures. At least 70 protesters were reportedly arrested by the police. Claiming death of a woman activist, Pakistan Tehrik-e-Insaf party, which teamed up with Qadri's party in the march, gave a countrywide strike call for Sunday against what it said the government aggression. Independent sources and police however did not confirm any casualty.
“Security forces are showing restraint to avert human loss as hundreds of women and children are among the protesters," defense minister Khawaja Asif said adding that the police had strictly been ordered not to use live bullets.
PM Sharif's political secretary Dr. Asif Kirmani said in a statement that Sharif would not resign.
“There is no question of Mr. Prime Minister’s resignation. He will not resign on the demand of a few thousands people,” he said.