Poppy roundels are across the TfL network, including the Elizabeth line for the first time.EastEnders actor Shane Richie has recorded a special station announcement 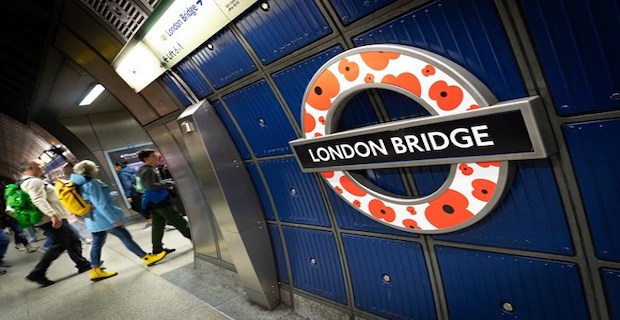 Customers using Transport for London (TfL) services will be able to spot specially designed poppy roundels at 20 Underground, Overground and bus stations across the network to mark this Remembrance period. Poppy vinyls are featuring on all Underground, Overground, DLR and tram vehicles, plus Elizabeth line trains for the first time. Poppy flags are flying at TfL piers with giant poppies wrapped around selected London buses.TfL has been working with Royal British Legion (RBL) for 10 years, and is once again supporting their annual Poppy Appeal that raises money to provide life-long support to the Armed Forces Community. Actor, singer and presenter, Shane Richie, recently recorded a special station announcement which will be played across many Underground and Rail services on London Poppy Day tomorrow (3 November) to encourage people to give what they can. Around 2,000 volunteers, including members of the Armed Forces from the Royal Navy British Army and Royal Air Force, will be out in force across the TfL Rail and Underground network on London Poppy Day – the biggest street collection of its kind in the UK. London Poppy Day offers the public the unique opportunity to interact with Service personnel. Donations can be made using contactless to help the RBL continue its vital work. The RBL’s support includes providing physical and mental health recovery and wellbeing services, financial and employment advice, and campaigning for the better treatment of serving and ex-serving personnel. Many of TfL’s staff, who keep London moving, are veterans themselves whose service helped give them valuable skills for their current jobs.  All London stations will fall silent at 11am on 11 November to honour the sacrifices of the Armed Forces community past and present. On Remembrance Sunday (13 November), members of the London Transport Old Comrades Association will once again participate in the National Service of Remembrance and RBL’s annual March past the Cenotaph.

Keywords:
Royal British LegionsPoppy AppealTfL Stations
Your comment has been forwarded to the administrator for approval.×
Warning! Will constitute a criminal offense, illegal, threatening, offensive, insulting and swearing, derogatory, defamatory, vulgar, pornographic, indecent, personality rights, damaging or similar nature in the nature of all kinds of financial content, legal, criminal and administrative responsibility for the content of the sender member / members are belong.
Related News