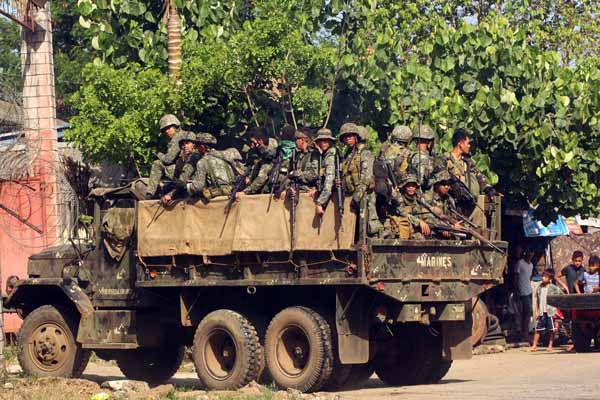 ZAMBOANGA CITY, Philippines (AA) – The beginning of the Islamic holiday of Eid was shattered by violence early Monday when 21 civilians were killed in an ambush by al-Qaeda-linked militants in the Philippines Muslim south. In an updated report, Western Mindanao Command Spokesperson Captain Rowena Muyuela confirmed that 21 people had been killed and 13 others wounded following the attack and ensuing gun battle between troops and Abu Sayyaf gunmen in Sulu province at around 8:30 a.m. Muyuela said that the number of deceased had risen from16 – including 10 women – but did not mention how many casualties had been suffered by government security forces and the guerillas. She added that the death toll could rise as troops had been deployed to the area to search for bodies and engage in sporadic fighting with the Abu Sayyaf gunmen - led by commanders Idang Susukan and Sibih Pisih. A planning officer at the Office of Civil Defense told the Anadolu Agency on condition of anonymity as he was not authorized to speak to media that the victims had been on their way to attend Eid al-Fitr celebrations when the ambush occurred in Talipao municipality. He, however, did not elaborate on the motive behind the attack.
Authorities suspect the attack targeted members of the Talipano civilian security force, called the Barangay Police Action Team, which is helping government forces fight Abu Sayyaf guerrillas.
Government security forces are pursuing the bandits, who – according to Muyuela - were led by commanders Idang Susukan and Sibih Pasah.
Meanwhile, a construction foreman abducted on June 5 was released Sunday in Sulu’s Indanan municipality, according to security forces.
Remigio Villanueva Lingayan had been kidnapped by suspected Abu Sayyaf militants along with Joselito Perez Gonzales who - according to Lingayan - died in Patikul, in whose mountains Abu Sayyaf's main camp on Sulu island is located.
Lingayan was immediately airlifted to Zamboanga City after he underwent debriefing and a check-up at Sulu Provincial Hospital.
Local officials led by Zamboanga Mayor Maria Isabelle "Beng" Climaco-Salazar presented the freed victim during a press conference Monday at City Hall.
Mayor Climaco-Salazar said no ransom had been paid for Gonzales’ release. She also thanked the provincial government of Sulu headed by Governor Abdusakur Tan for his safe release.
Since 1991, the Abu Sayyaf - armed with mostly improvised explosive devices, mortars and automatic rifles - has carried out bombings, kidnappings, assassinations and extortions in a self-determined fight for an independent Islamic province in thePhilippines.
It is notorious for beheading victims after ransoms are failed to be paid for their release.