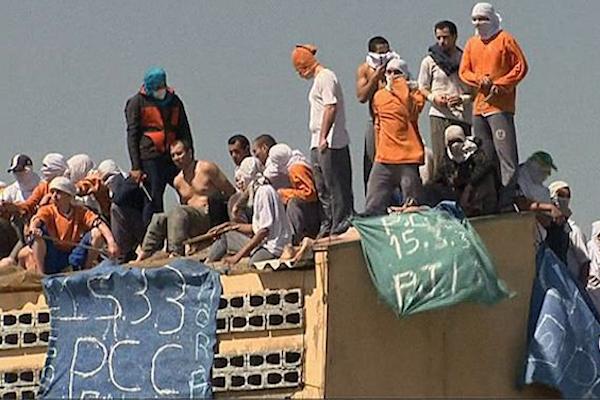 A prison riot in southern Brazil that claimed the lives of at least five people, and injured at least 25 others, ended Tuesday, the State Justice Secretary confirmed to local media. Two of those killed were beheaded, and another two were pushed from the roof of the facility, located in the city of Cascavel, in Paraná state, south Brazil. No details are currently known about the other fatality.
The riot, sparked by inter-gang tensions and poor prison conditions, ended at 3:30 a.m. local time, some 45 hours after it began. About 20 of the facility's 24 wings have been destroyed, a lawyer representing the prisoners said.
A local judge, Paulo Damas, helped with the negotiations and managed to reach an agreement with riot leaders to rehouse prisoners in other facilities within the state, according to the G1 news portal.
Two guards who had been taken hostage were later released and received treatment for non-life-threatening injuries. Local media reports that this happened only after the majority of the 1,044 inmates had been transferred - a condition imposed by riot leaders to end their rebellion. There has been 851 confirmend prisoner transfers, however, an "unknown number" of inmantes are unaccounted for, presumably dead or escaped, according to the Folha de S.Paulo newspaper, citing local authorities.
Grievances included violent treatment by prison guards and sub standard food and hygiene. Inmates also demanded improved visiting rights and greater dialogue with prison directors, according to officials.
It is not yet clear what punishments, if any, inmates will face over the five deaths during the riot.
- Gruesome scenes
Inmates took a number of guards and prisoners from a rival gang hostage while breakfast was being served early Sunday morning. Only 10 guards were on duty at the time.
Inmates’ relatives have also protested conditions at the prison and have blocked a local highway at least three times since Sunday.
Prisoners with improvised balaclavas were seen on the roof beating hostages who had ropes around their necks. Some of those held were "psychologically tortured" as at least one severed head was placed in the laps of some hostages, reports said.
Folha says tensions have flared up at the facility in recent years as the number of inmates at the prison was increased from just over 900 to more than 1,100 with "no improvement to infrastructure."
The newspaper says the state as a whole added 5,000 prison spaces since 2010, to a maximum of 19,000, but that about 20 percent of the increase came from simply adding more beds to existing facilities.
Riot leaders claimed to be part of the PCC, a notorious prison gang which sprung up in São Paulo prisons in the 1990s and coordinated attacks on police officers in 2012 as revenge for extrajudicial killings against its members.
The gang has since spread into neighboring Paraná state. The prison in Cascavel is situated more than 700 km (435 miles) from São Paulo.
- Problems persist
It was not the first time, even in 2014, that inmates have been beheaded in Brazil's prisons. In January, Folha released a video that was leaked from the notorious Pedrinhas prison in the northeastern state of Maranhão that showed three inmates who suffered the same grisly fate. Brazil has the world's fourth largest prison population with more than 500,000 inmates – behind only the United States, China and Russia – and unsentenced prisoners account for at least a third of this total. Human rights groups have warned that a toxic mixture of dangerous gangs and severe overcrowding blights many of the country’s prisons.