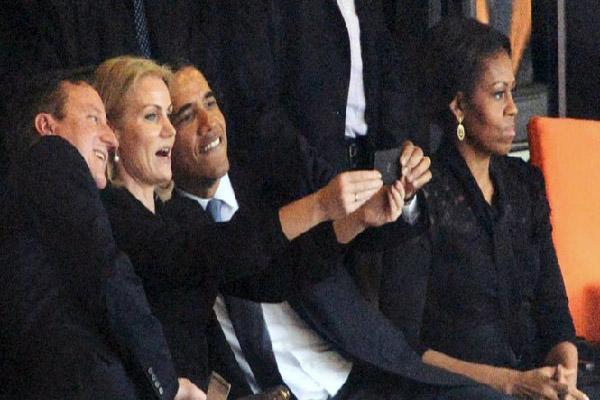 British Prime Minister David Cameron on Wednesday defended his behaviour at Nelson Mandela's memorial service in South Africa after he was criticised at home for posing with U.S. President Barack Obama for what some said was a disrespectful photograph.

The self-portrait - known as a "selfie" in online social media - was taken on Tuesday in Soweto at the memorial event for Mandela, who died last Thursday aged 95.

It captured Cameron and Obama - who suffered a similar ticking off in the U.S. media - smiling broadly either side of Danish Prime Minister Helle Thorning-Schmidt.

All three appeared to be in high spirits and sharing a joke as a stern-faced Michelle Obama looked away.

The image graced the front pages of many of Britain's newspapers on Wednesday, with the mass-market Sun tabloid newspaper calling it a "gaffe" that betrayed a lack of respect for the late South African politician.

Cameron, who is trying to court the Sun's readers ahead of a 2015 election, was asked about the incident during his weekly question and answer session in the British parliament.

"You should always remember that the television cameras are always on," Cameron told parliament. "In my defence I'd say that Nelson Mandela played an extraordinary role in his life and in his death in bringing people together."

So when asked by the Danish prime minister to join the photograph he said he had thought it only polite to agree since she was married to the son of a former leader of the opposition Labour Party.

Separately, Cameron's spokesman stressed the event had been a "celebration" of Mandela's life rather than his funeral, which is due to take place on Sunday.

Across the Atlantic, the New York Daily News said Obama had committed "a funeral faux pas" by participating in the photograph, which the Washington Post said had detracted from the U.S. leader's eulogy to Mandela.