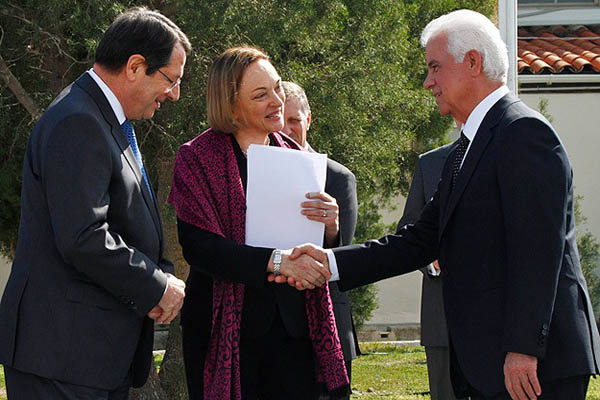 Peace talks between Turkish Cypriots and Greek Cypriots to resolve a 40-year-old political dispute on the divided island have resumed in a "friendly and cordial atmosphere," says the head of the United Nations mission in Cyprus. Lisa Buttenheim - reading from a joint declaration on the path towards reunification on Tuesday - told journalists that Turkish Cypriot President Dervis Eroglu and Greek Cypriot leader Nikos Anastasiades had expressed their determination to resume structured negotiations in a results-oriented manner.  "A settlement would have a positive impact on the entire region, while first and foremost benefiting Turkish Cypriots and Greek Cypriots, respecting democratic principles, human rights and fundamental freedoms as well as each other’s distinct identity and integrity and ensuring their common future in a united Cyprus within the EU," she said.

Both leaders agree that the status quo is unacceptable, its prolongation will have negative consequences for the Greek Cypriots and Turkish Cypriots, and expressed determination to resume structured negotiations in a results-oriented manner, added Buttenheim.

The leaders of the two countries met in the United Nations-controlled buffer zone on the island to thrash out an agreement which the UN hopes will lead to equal status for the two states, while aiming to bring the divided communities closer under a federated government.

The island has been divided into Greek and Turkish sides since a Greek Cypriot coup was followed by a Turkish peace mission to aid Turkish Cypriots in the north in 1974.

A 2004 deal put forward by former UN Secretary General Kofi Annan to reunify the Turkish Cypriot and Greek Cypriot communities was defeated by a "no" vote in a referendum held in the Greek Cypriot administration. The Turkish Cypriots had voted in favor of the Annan plan. Intermittent talks have since been inconclusive due to political and economic reasons.

Since 1974, talks between the two sides continued with different aims and formulas, until 18 months ago, when the Greek Cypriot side assumed the 2012 EU rotating presidency and the eurozone debt crisis struck the economy.