The tram derailed in Croydon, south London, early on Wednesday morning, and the driver of the tram has been arrested. 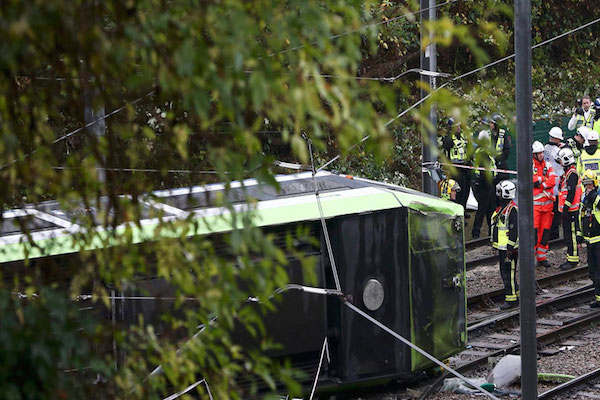 The tram derailed in Croydon, south London, early on Wednesday morning, and the driver of the tram has been arrested. Some of the 50 who were injured in the incident were seriously hurt, and the London mayor, Sadiq Khan, has warned that the death toll is likely to rise even further.

Khan, visiting the scene, said: “I can confirm that five people have died and we think that number may well increase,” he said. “A number of those who are at hospital are in a serious condition.”

The Rail Accident Investigation Branch said the tram derailed as it was negotiating a “sharp, left-hand curve” which has a speed limit of 12mph, near the Sandilands tram stop in Addiscombe Road. A spokesman said: “Initial indications suggest that the tram was travelling at a significantly higher speed than is permitted.”

Images uploaded to social media showed emergency services working at the scene of what police described as a “serious incident”.

Police confirmed the driver of the tram had been arrested but did not give any further details.

“The Rail Accident Investigation Bureau is now investigating this incident and will work out how this tragic incident has occurred.” A casualty bureau number has been set up for relatives and friends to call – 0800 056 0154.

Witnesses reported hearing a bang at the scene, where police were called at 6.13am. The tram appeared to be on its side next to an underpass, and there was a large police cordon in the area with scores of emergency vehicles nearby. The tram seemed to have derailed at a point at which the track diverges.

The London ambulance service (LAS) said it had treated a number of patients and more than 50 had been taken to hospital.

Liam Lehane, a spokesman for the LAS, described many of those hurt as “walking wounded” but said others suffered serious injuries.

Thirty-one of the 51 people taken to hospital were transferred to Croydon University hospital. Croydon Health Services NHS trust said: “Our staff are currently triaging and caring for them so we would ask members of the public with more minor routine ailments to consider going to the local walk-in centre or their GP if possible.”

St George’s hospital in Tooting, south-west London, is treating the other 20 people. A spokesman said: “Of these 20 patients, four are seriously injured. All patients are being cared for by our clinical teams.”

Khan said: “I am in contact with emergency services and TfL, who are working extremely hard to get the situation under control and treat those who have been injured. My thoughts are with all those involved in this incident. We are asking people to please visit the TfL website, tfl.gov.uk, for the latest travel information.”

TfL said the line was suspended between Reeves Corner and Addington Village/Harrington Road and would probably remain closed for the rest of the day.

Mike Brown, London’s transport commissioner, said: “Our thoughts are with those who sadly lost their lives in this incident, those who were injured and the families of those affected. We are working closely with the emergency services on-site and will continue to work with them during the investigation into what happened.”

Finn Brennan, of the train drivers’ union Aslef, said the incident was “truly dreadful”. He said: “Lives have been lost and there are many serious injuries. This is a tragedy for all those involved. For the women and men who set out this morning on their journey to work and suffered this awful accident and their families, the grief and pain must be terrible.

“There will be a full investigation into the causes of this incident by the RAIB and others. There should be no rush to judgment or to place blame until the facts are known.

“For now, our thoughts are with all those injured and lost, their families, Tramlink staff and the emergency service and NHS staff working to save lives as they do every day.”

London’s only tram network operates in the south of the capital, from Wimbledon to Beckenham Junction, Elmers End and New Addington, via Croydon. The system uses on-street and segregated running for the 17 miles (27km) of track. More than 27 million passengers used the service in 2015-16.
This is believed to be the first tram crash involving fatalities on board since 1959, when two female passengers and the driver died after a tram caught fire in Shettlestone Road, Glasgow, after a collision with a lorry.