The country’s political landscape is now thrown into disarray after the “No” camp, led by former president and now Sen 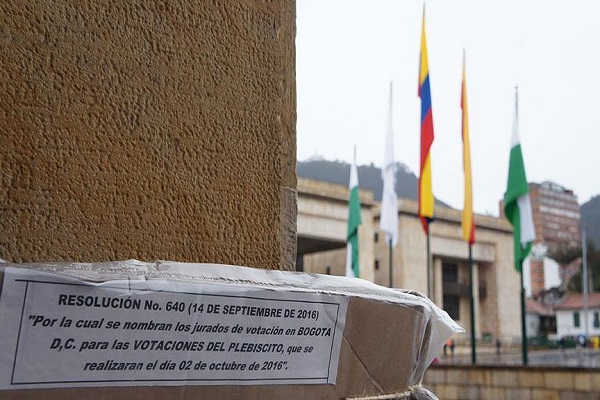 BOGOTA-Colombians on Sunday rejected a peace deal between the government and the FARC to end a 52-year conflict. “I am the first to accept this result,” President Juan Manuel Santos said during a televised address from the Presidential Palace. “I will not give up and will continue to strive for peace until the last minute of my mandate,” he said, adding that a bilateral cease-fire between the two sides remains in place.

The country’s political landscape is now thrown into disarray after the “No” camp, led by former president and now Sen. Alvaro Uribe, took 50.2 percent of the vote casting 6.4 million ballots and edging the “Yes” camp by just 60,000 votes.

The result suggests still widespread distrust for the FARC exist.

“Peace is exciting, the texts written in Havana are disappointing,” Uribe told the media earlier Sunday.

The deal between the Revolutionary Armed Forces of Colombia (FARC) and the government -- formally signed Sept. 26 to great fanfare before international dignitaries – enjoyed overwhelming support of 65 percent in polls taken a week before the vote.

Talks on the deal began in Cuba in November 2011 and ran for almost four years before an agreement was reached in August.

Santos believed the agreement should be put to a national referendum, a decision that now seems to be a major political miscalculation.

What happens now is unclear. On several occasions, Santos and Colombia’s chief negotiator in Havana, Humberto de la Calle, said it would be impossible to renegotiate the agreements with the FARC. The “No” campaign has insisted on renegotiations, however, because they believe the FARC was given too much.

On a similar note, during the FARC’s conference last month, Carlos Antonio Lozada, a member of the guerrillas’ negotiating team said that it would be impossible to reopen talks should a “No” vote win. “There is no possibility of what was agreed in Havana to be renegotiated, that which is agreed, is decided and the possibility to turn back doesn’t exist,” he said.

Towns and regions which have been severely affected by the conflict, including Bojayá, La Macarena, Barbacoas and Buenaventura, voted considerably in favor of the peace agreements while most cities, excluding the capital, Bogotá, voted against the deal in which 63 percent of eligible voters did not cast a ballot.