Secretary of State John Kerry spoke via telephone Monday with his Russian counterpart Sergey Lavrov about ways to restore a fresh cease-fire throughout Syria, the State Department said 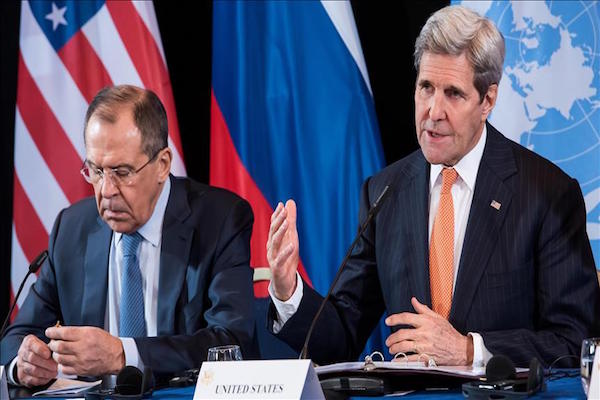 WASHINGTON-Secretary of State John Kerry spoke via telephone Monday with his Russian counterpart Sergey Lavrov about ways to restore a fresh cease-fire throughout Syria, the State Department said. "Both ministers, again talked predominantly about the cessation, acknowledging that it is in fact fragile and, talking about ways in which it can be restored throughout the country quite frankly," according to agency spokesman John Kirby.

The U.S. and Russia agreed Friday to reinforce a short-term cease-fire for some cities in Syria, where attacks against civilians have increased recently.

"We have always been focused on areas like Aleppo, and that was certainly a topic of the discussions that the secretary had in Geneva and with Foreign Minister Lavrov today."

In a recent trip to Geneva, Kerry also met with U.N. Special Envoy for Syria Staffan de Mistura, and urged that Syria's floundering cessation of hostilities be restored.

According to Kirby, the cease-fire in specifically Aleppo, was "most at risk" and continued to be violated – a concern for the U.S. administration.

Kirby said he was aware of reports of creating safe zones within the area of Aleppo but that it was too early to get into specific details of them.   He added that the U.S. wanted to see the whole of Syria be a safe zone "where people are not being gassed and barrel bombed by the regime."

White House spokesman Josh Earnest, said the Obama administration did not believe that creating safe zones was "a practical alternative" as it would require the U.S. to safeguard those zones with a "significant commitment of ground troops."   As part of the administration's policy, the U.S. does not want to put boots on the ground in the region.

Kirby said Kerry and Lavrov also talked about humanitarian assistance and the need to continue a "sustained" delivery of aid to areas in need.

According to Kirby, another topic high on the diplomats' agenda was the possibility of another International Syria Support Group (ISSG) meeting "sometime in the near future.  " "You can expect the ISSG to gather again soon to help work out what the next that best steps are on the political process," he said.

He did not give additional details about the setting of the possible meeting.

Regarding reports that the Assad regime continued to attack hospitals throughout the weekend, Kirby described those kind of attacks as "unconscionable" and "reprehensible".

"They need to stop," he said. "It is in keeping with what we've seen as a pattern out of the regime to target innocent people, and now going after people who are trying to help innocent people and first responders."

When asked whether the U.S. respected the U.N. Security Council's two-year timetable for a political transition in Syria, Kirby said it was "still the goal and the objective of the political process."

"We're hundred percent committed to that," he said.

Kerry and Lavrov also spoke about the occupied Karabakh conflict, and the need for both sides to reduce tensions.

Syria has been locked in a vicious civil war since early 2011, when the regime cracked down on pro-democracy protests.

Since then, more than 250,000 victims have been killed, according to U.N. figures.