Broadchurch to try and ensure the safety of Claire Ripley (Eve Myles), who was the wife of the suspect in his previous (and previously mentioned) Sandbrook case, 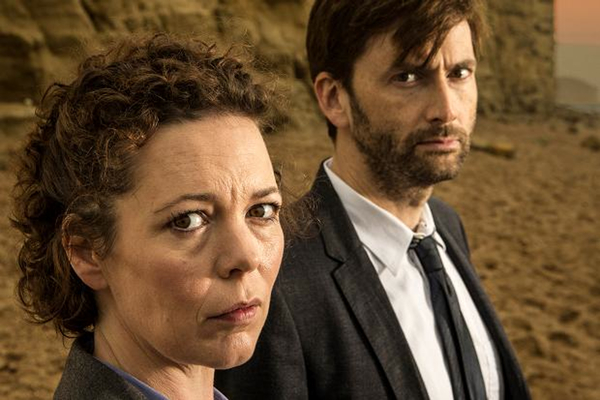 There has been much speculation over the new cast members and each of the characters introduced here had key roles to play. As well as Myles, others included a commanding Marianne Jean Baptiste as Miller’s new defence lawyer Sharon Bishop, and most tantalisingly, Charlotte Rampling, as Jocelyn Knight, a retired barrister “marinating in self pity” like a latter-day Miss Havisham in her secluded home who came out of retirement to prosecute Miller. The fact that both Knight and Bishop worked together previously struck the only false note - their meeting on the beach was wildly unconvincing. The first series of Broadchurch, which aired in the spring of 2013, was the most successful TV whodunit in recent memory. It became a national conversation point as viewers analysed the motives of a large Cluedo board of suspects who might or might not have murdered Dorset schoolboy Danny Latimer. Could this second run come close to capturing our imaginations in the same way? On the basis of this first episode, the answer is yes. Series creator Chris Chibnall showed an astonishingly assured pace. After a beautifully shot 10 minutes which slowly cranked up the tension as we saw various familiar characters gather at court to witness Joe Miller’s sentencing, we received a short sharp shock as Miller (Matthew Gravelle, whose name was omitted from the cast list) pleaded not guilty to the killing of Danny Latimer. Any thoughts of the series moving on vanished as it became clear that a full trial would now take place. This bolt from the blue made me realise just how powerful and compelling the case of Danny Latimer was and how satisfying it was to rake over what had gone before.

More shocks were to follow as we found out that DI Hardy (David Tennant) had come to Broadchurch to try and ensure the safety of Claire Ripley (Eve Myles), who was the wife of the suspect in his previous (and previously mentioned) Sandbrook case. Introducing this new strand to the story is an ambitious move and shows a certain amount of chutzpah from Chibnall as both cases will no doubt intertwine over the remaining seven episodes.