'Dedication to truthfulness is crucial to rewrite our complicated and very painful history,' says museum director 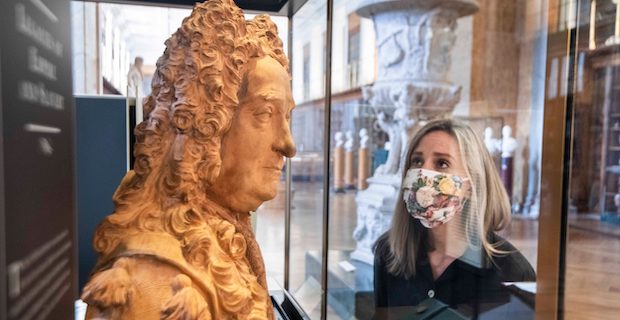 The British Museum has removed a bust of its founder into a secure cabinet due to his links to colonialism and slave trade, according to reports.

The museum has removed the bust of Ireland-born slave trader and collector Sir Hans Sloane as a response to the Black Lives Matter movement, which was sparked after the killing of George Floyd by a policeman in the US. The decision was approved by Hartwig Fischer, the museum’s director, The Daily Telegraph reported.

“We have pushed him off the pedestal,” Fischer said. “We must not hide anything. Healing is knowledge.”

He said the bust has been placed in a cabinet alongside artefacts explaining his work in the context of the British Empire.

Fischer told The Telegraph that other artefacts, including those brought back to Britain by Captain James Cook, will have new labels explaining how they were acquired by the museum through “colonial conquest and military looting”.

“Dedication to truthfulness when it comes to history is absolutely crucial, with the aim to rewrite our shared, complicated and, at times, very painful history,” Fischer said.

He said: “The case dedicated to Hans Sloane and his relationship to slavery is a very important step in this.

“We have pushed him off the pedestal where nobody looked at him, and placed him in the limelight.

In June, the statue of slaver trader Edward Colston was brought down in Bristol before it was thrown in water near Bristol harbour.

Later on, a statue of another slave trader, Robert Milligan, was successfully removed from its plinth in London’s Docklands.

A campaign demanding the removal of the 19th century politician Cecil Rhodes’ statue from outside Oxford University is still active as campaigners claim it acts as a symbol of imperialism and racism.

Sir Hans Sloane, (16 April 1660 – 11 January 1753), was an Irish slave trader who was married to Elizabeth Langley Rose, the heiress to sugar plantations in Jamaica where enslaved people were forced to work.

Sloane is believed to have bequeathed his collection, which he gathered from across the then-British Empire, of more than 70,000 items, providing the foundation of the British Museum, the British Library and the Natural History Museum.

Many streets and places still carry his name in the UK and Ireland with London's Sloane Square being one of the most famous of all.

Keywords:
British MuseumHans Sloane
Your comment has been forwarded to the administrator for approval.×
Warning! Will constitute a criminal offense, illegal, threatening, offensive, insulting and swearing, derogatory, defamatory, vulgar, pornographic, indecent, personality rights, damaging or similar nature in the nature of all kinds of financial content, legal, criminal and administrative responsibility for the content of the sender member / members are belong.
Related News