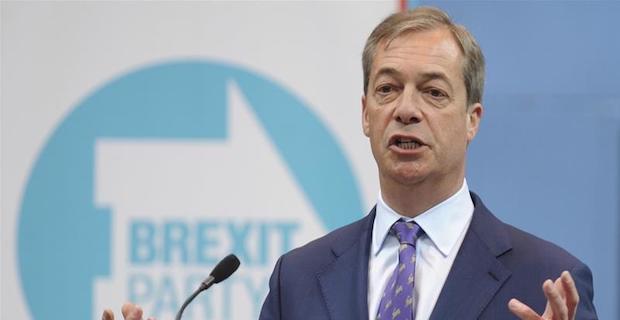 Brexit Party leader Nigel Farage said his party will not contest in more than 300 constituencies in December, which were won by the leading Conservative Party in 2017 elections.

Farage’s announcement came as a direct boost for the Tories three days ahead of the deadline the parties should nominate their candidates for the Dec. 12 elections.

Farage said standing candidates across the country’s 650 constituencies would play into the hand of the Liberal Democrats -- the only anti-Brexit party -- and could increase the chances of another EU referendum taking place.

“Brexit Party will not contest the 317 seats the Conservatives won at the last election but what we will do is to concentrate our total effort into all of the seats that are held by the Labour Party who have completely broken their manifesto pledge in 2017 to respect the result of the referendum, and we will also take on the rest of Remainer parties,” Farage said.

“We will stand up and we will fight them all,” he added.

He said in a speech in Hartlepool, northwest England, he was concerned that “by far the most likely outcome” of fighting the Tories in every seat would be to deliver another hung parliament.

He previously offered an alliance to Tories, which was rejected by the leading party.

Farage last week said he would not stand as a candidate in the Dec. 12 election that is one of the most important elections, as the result will shape the Brexit crisis.

Keywords:
BrexitBrexit PartyNigel Farage
Your comment has been forwarded to the administrator for approval.×
Warning! Will constitute a criminal offense, illegal, threatening, offensive, insulting and swearing, derogatory, defamatory, vulgar, pornographic, indecent, personality rights, damaging or similar nature in the nature of all kinds of financial content, legal, criminal and administrative responsibility for the content of the sender member / members are belong.
Related News