Both countries aim for closer ties while drifting away from EU, says Turkish academic 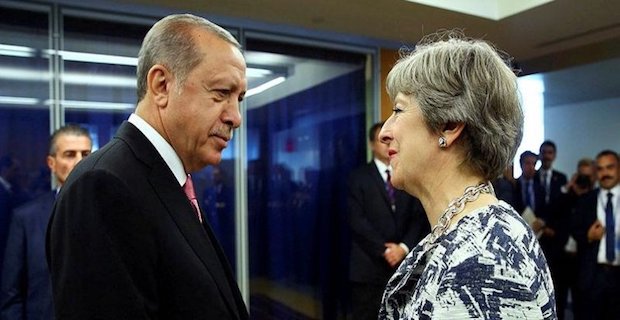 As the U.K. government has proven to be unprepared for Brexit, this could serve as a vast opportunity for developing relations with non-EU states like Turkey, experts said.

According to Seckin Baris Gulmez, an assistant professor of international relations at Izmir Katip Celebi University, Turkey and the U.K. have been experiencing parallel situations in their relations with the EU, despite technically different processes.

Turkey applied for EU membership in 1987 while accession talks began in 2005.

As for the U.K., it is set to leave the EU in March 2019 but a final deal to shape future U.K.-EU relations has yet to be agreed upon.

“Comparably, it seems that neither of the countries will totally get what they want from the EU,” Gulmez told in an email interview.

“It shows that both countries will get closer to each other while getting away from the EU in a harsh way,” he said.

The talks between Turkey and the EU stalled in 2007 due to the objections of the Greek Cypriot administration in the divided island of Cyprus, as well as opposition from Germany and France.

Pointing out the friendly relations between Turkey and the U.K. for almost a century, Gulmez said both countries were of the opinion that “bilateral relations independent from the EU” would be beneficial.

Expressing hope for improved Turkey-U.K relations, Gulmez, highlighted that the U.K. was now in search of potential partners in the post-Brexit period.

“In this context, I believe that the Brexit process is a significant opportunity for Turkey to improve bilateral relations [with the U.K.] and gain a position against the EU,” said Gulmez, who recently worked on Turkish-British diplomatic relations.

It seems that Turkey would not miss that opportunity. As unveiled in the country's 100-day action plan, it aims to strengthen trade and economic ties with the U.K. in the post-Brexit period.

According to Gulmez, the latest resignations in the Conservative Party in July was evidence that the British government was unprepared for Brexit.

Last month, Boris Johnson resigned as foreign secretary over disagreements with Theresa May and her Chequer’s Plan that sets out the U.K.’s relationship with the EU after Brexit.

“They couldn’t filter the determination of the public for Brexit till the very last moment,” said Gulmez.

Emre Gonen, an academic from the International Relations Department at Istanbul Bilgi University, puts the blame for the Brexit hurdle in the U.K. on the lack of an “alternative road map”.

“The main problem is that the Tory government organized the referendum without having an alternative road map,” Gonen said.

It led to difficulties in establishing a negotiating stance before the European Commission, which has “an experienced negotiator”, according to Gonen.

“This has created a very asymmetric situation where we see the parade of negotiators and politicians of the U.K. desisting one after the other, practically because they see the fragility of their stance,” he added.

Keywords:
BrexitTurkey UKIzmir Katip Celebi UniversitySeckin Baris Gulmez
Your comment has been forwarded to the administrator for approval.×
Warning! Will constitute a criminal offense, illegal, threatening, offensive, insulting and swearing, derogatory, defamatory, vulgar, pornographic, indecent, personality rights, damaging or similar nature in the nature of all kinds of financial content, legal, criminal and administrative responsibility for the content of the sender member / members are belong.
Related News