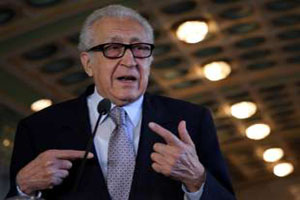 UN-Arab League special envoy to Syria Lakhdar Brahimi headed to Baghdad on Monday after wrapping up two-day visit to Cairo. Brahimi is on a Middle East tour to get support for the Syria peace conference, also known as Geneva 2. In Cairo, he held talks with Arab League chief Nabil al-Arabi and Egyptian Foreign Minister Nabil Fahmi. During a press conference with Al-Arabi, Brahimi said no final date has been set yet for the Geneva 2 conference although the head of the pan-Arab body said that it was set for November 23. "Following my tour, I would return to Geneva to meet with the five permanent members of the UN Security Council to set a final date for the conference, hopefully in November," Brahimi said. The conference had initially been planned for late May, after having first been proposed at a Moscow meeting between US Secretary of State John Kerry and Russian counterpart Sergei Lavrov.

But amid disagreements as to who should have seats at the table, the event was repeatedly postponed.

Brahimi's spokeswoman Khawla Mattar said the date for the long-awaited peace conference in Geneva will be announced by UN Secretary General Ban Ki-moon "in due time".

She added that the meeting was likely to place in the "second half of November".

But Fayez Sara, an adviser to Ahmad Jarba, the head of the Syrian Opposition Coalition (SOC), told Anadolu Agency that the coalition has not received any confirmation about the conference's date.