Why row from New York to Gallipoli Peninsula? 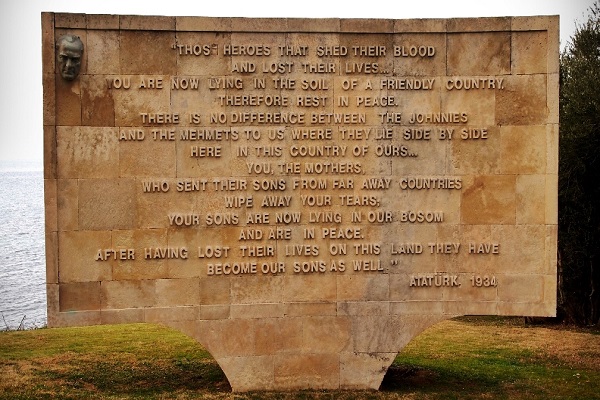 1915 was a difficult year in World War I. 18 March 1915 is the day that the battleships from the Mediterranean Expeditionary Force (MEF) were stopped by mines and land based artillery in the Dardanelles Narrows. This day is remembered in Turkey as “Çanakkale Maritime Victory and Memorial Day” (Çanakkale Deniz Zaferi ve Şehitleri Anma Günü). Following this fateful day, the MEF planned amphibious landings to secure the Gallipoli Peninsula. Australian and New Zealand Army Corps (ANZAC) troops landed on the western shores on 25 April where they would fight for eight months until they evacuated the peninsula in December 1915. The day of their landing is now commemorated in Australia and New Zealand as the ANZAC Day for "the contribution and suffering of all those who have served."

Casualties were high - approximately 252,000 dead and wounded or 52% for the British/French while the Ottoman side suffered about 300,000 casualties or a rate of 60%. During the campaign, 8,708 Australians and 2,721 New Zealanders were killed. Gallipoli is remembered as “the last gentlemen’s war” where the sides refrained from the use of chemical weapons and troops benefited from the proximity of the trenches, tossing food and cigarettes to the enemy side with notes attached. This has created a lasting bond of mutual respect, admiration and friendship.

In 1985, the Turkish Government officially renamed the beaches where the ANZAC landed as “Anzak Koyu” which is the translation for ANZAC Cove. Every year since then, a dawn service is held during the memorial ceremonies for the fallen. In 1934, Atatürk, the founder of modern Turkey issued the following words of wisdom in memory of the ANZAC:

“Heroes who shed their blood and lost their lives! You are now lying in the soil of a friendly country. Therefore rest in peace. There is no difference between the Johnnies and Mehmets to us where they lie side by side here in this country of ours. You, the mothers, who sent their sons from far away countries wipe away your tears; your sons are now lying in our bosom and are in peace. After having lost their lives on this land they have become our sons as well.”

These words are inscribed on a monument in Anzac Cove and on the Kemal Atatürk Monument in Canberra to honor the heroism and the self-sacrifice of all soldiers in those fierce battles.

Inspired by these wise words that imply peace and reconciliation, in memory of those Ottoman soldiers who gave their lives in defence of their homeland and of those ANZAC troops who fell on far away lands after getting caught in the madness of war, Erden Eruç will row eastbound across the North Atlantic Ocean from New York to ANZAC Cove. This challenge will build on the mutual respect and friendship that exists between the Turkish, Australian and New Zealand people. Eruç will reach Gallipoli Peninsula before 25 April 2015, the 100th Anniversary Dawn Service.

Expenses while waiting for departure in New York

Satellite phone expenses during the crossing and later on the Mediterranean

Waiting out the weather/seasons in marinas or fishing ports along the northern Mediterranean coast, haul out of the boat on shore if necessary

Building a cradle for the boat in Turkey, placing in a 40’ container and shipping to New York

Buying a trailer and transporting back to Seattle

The above estimated budget is the minimum necessary amount to successfully execute this project. Assuming that the rowboat will not suffer any damages, or be lost, it will be possible to complete the project with this conservative budget. Should there be damage requiring rescue, tow or repair, there will be need for more funds. For this reason, the goal would be to aim for at least 100,000USD in funding. The estimated likelihood of success for this project is 80 percent. The critical threshold will be to enter the Mediterranean through the Gibraltar Straits.

The expenses would be kept at a minimum and if the sponsors agree, the remaining budget can be reassigned by the Seattle based 501(c)(3) nonprofit Around-n-Over. For example, additional funding will help finish the Castaway with Purpose documentary about Erden’s historic 5 year 11 day journey which became the first solo circumnavigation by human power.

Past Accomplishments and Guinness World Records by Erden Eruç

• The longest time at sea by a solo ocean rower: 312 days on the Pacific from California to the waters of Papua New Guinea, 2009 Guinness BWR

• The most experienced ocean rower in history in total career miles: ~ 29,000 nm

• The first ever ocean crossing by rowing from the southern hemisphere to the northern, from Namibia to Venezuela

• The longest row across the Atlantic both in distance and in duration: ~5,465 nm in 153 days, from Namibia to Venezuela

• The longest nonstop row on the Indian Ocean: 5,086 nm from Australia to Madagascar

• 2013 Adventurer of the Year, Outside Magazine

• 2013 Citation of Merit, The Explorers Club

Erden Eruç submitted a dozen records which are pending certification by Guinness World Records. The submission was handled by London based Ocean Rowing Society, the official adjudicator of related records for Guinness.

Above - The wise words issued by Ataturk in 1934 are immortalized on a monument on the Gallipoli battlefields.

Right – A Mehmetçik carrying a Johnny back to the ANZAC trenches during a ceasefire. This monument depicts an actual event that took place where an Ottoman soldier waved a white flag then stepped out of his own trench to carry the wounded out of harm’s way.

Rowing on the Indian Ocean, near Îles Glorieuses due northwest of Madagascar, Nov 2011