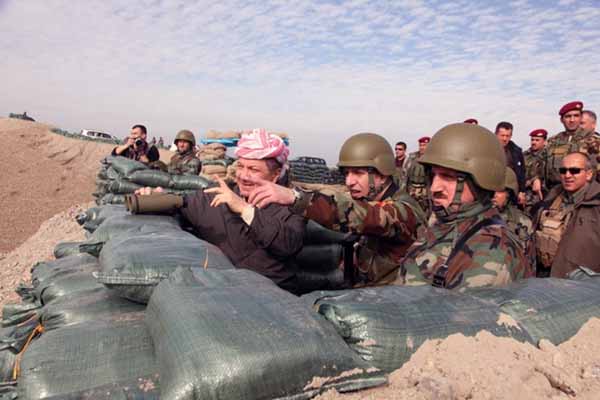 Iraqi Kurdish leader Massoud Barzani has warned the Democratic Union Party (PYD), the Syrian offshoot of the Kurdistan Workers' Party (PKK), for declaring itself as the representative of the Kurdish population in Syria, a move that is likely to deepen tension that has escalated between Barzani's Kurdistan Regional Government (KRG) and the PYD in recent days. “No one can declare itself the representative of Kurdish people in Syria before elections are held. We will not permit such initiatives. If they [PYD] do not change this attitude, we will pursue a different method [to prevent this],” said a statement posted on the KRG's official website, the private Cihan news agency reported on Tuesday. Barzani called on the PYD, which he said acted differently from other Kurdish groups in Syria and used "shady methods," to change its attitude and warned that it would otherwise "pursue a different course," without elaborating. Barzani united the PYD and a gathering of other Syrian Kurdish groups called the Kurdish National Council (KNC) at a conference in Arbil in the KRG-run northern Iraq in July 2012. Under the deal that came to be known as the Arbil agreement, the PYD and the KNC joined forces under an umbrella organization called the Syrian Kurdish Supreme Council. Disagreements between the PYD and the KNC, however, remained. The recent establishment of a pro-Barzani faction within the KNC has reportedly worsened the dispute.

Tensions peaked last week when the PYD detained 75 Syrian Kurdish people reported to be members of a Syrian Kurdish political party that has close links with Barzani. Infuriated by the PYD's move, Barzani called on the military group to release the party members. It was reported on Tuesday that 75 politicians were released by the PYD.

“Over the last years, the situation of Syrian Kurds has been more stable compared to those in other places as a result of Barzani's efforts," the KRG statement said. "Last July, the Syrian Kurdish Supreme Council was established and this brought Kurds great happiness and boosted their morale. Since then, Barzani has kept an equal distance towards all parties in Syria. Yet, after the Arbil agreement, a specific group has put itself in a shady position by distancing itself from other parties. This group, besides not abiding by the Arbil agreement, kills and kidnaps people therefore damaging other Kurdish parties. We will not let this continue,” the statement added.

The PYD refuses to join the Arab opposition against the Syrian regime while the parties comprising the KNC are reportedly more sympathetic towards the opposition groups. The Syrian Kurdish Supreme Council is not a part of the Syrian opposition fighting to topple President Bashar al-Assad.

“I can be a Kurd living in Syria and another can be living in Iran, and we're all together in the democratic confederation of the Middle East,” Muslim told the Arbil-based online newspaper Rudaw during a recent visit to London. “At that time, the Kurds can be united without changing any borders,” he said.

Muslim also said that the PYD wanted the Arbil agreement to remain intact, calling it a "gift from Mr. Barzani."

"We don't like to break it up. But what happened is not about the agreement,” Muslim said. He added that the problem stems from disagreements within the KNC, which was formed in October 2011, under Barzani's sponsorship.