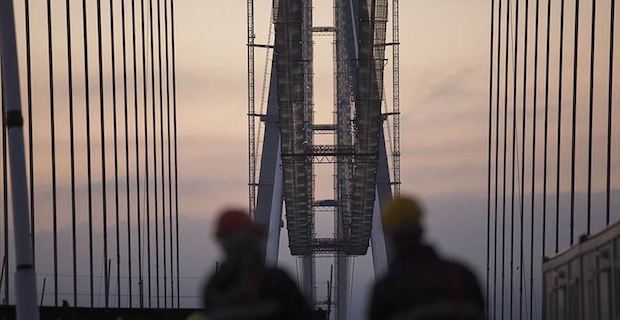 Bangladesh’s largest river bridge is expected to bolster country’s economy through a landmark connection between capital Dhaka and the country's southern region. Construction of the Padma bridge -- a multipurpose road-rail bridge across the Padma River -- is expected to be complete by end-2020 and open for plying by mid-2021.

"Our overall progress in construction is 82 percent and currently we are working very smoothly. If nothing unpredictable happens, we must be able to complete it by December 2020", M Shafiqul Islam, director of the bridge project told Anadolu Agency.

This is the largest project in the country’s communication sector in terms of size and expenditure, he added, "And we do not expect another mega project [like this one] in the near future." "We hope to complete the construction timely as long as the flow of fund, technical progress, condition of river and external environment -- all are normal", Islam said.

The much-hyped bridge project is marked to be challenging for incumbent Awami League government since Prime Minister Sheikh Hasina assuming power in 2009 as the deadlines of the project have shifted several times due to uncertainty.

The government declared it as a top priority project initially with a 2013-deadline to complete.

But the 6.15-kilometer-long (3.8 miles) billion-dollar project turned into an uncertainty as the World Bank withdrew its promised $1.2 billion loan on allegation of corruption, resulting in then the Communications Minister Syed Abul Hossain Hossain to quit in 2012. Prime Minister Sheikh Hasina, however, brushed aside the corruption charge and declared a challenge to construct the bridge with internal resources.

Government manages a loan of 298.94 billion Bangladeshi taka (around $3.5 billion) from internal sources for the project with condition to repay within 35 years at one percent interest.

The strategic bridge was also marked as one of the core campaigning issues of the South Asian country’s national polls in 2014 and 2018.

Hasina came to power for the third consecutive term to lead the country five more years in 2018 with a promise to complete the much-anticipated bridge by December 2018 and then by December 2019, but she failed to keep the promise.

Promising for no delay

Promising no more delay, Road Transport and Bridges Minister Obaidul Quader said last week that the construction works of the bridge project had progressed by 73%.

"We hope to finish the construction of the Padma Bridge by December next year. It may take another three to five months to get ready for the opening. The bridge will be opened to traffic by June 2021," Quader said.

The construction of $3.1 billion rail link project on the bridge is also going on in full swing.

"We hope that the construction of both main bridge and rail link will be completed together," project director Islam said.

In the rail link project, however, China is assisting with a $2.67 billion loan with a two percent interest rate, government sources said without disclosing any time frame.

"Though the main bridge and the rail link project are being constructed by Chinese companies, we are fully updated of the progress," Islam added.

China's Major Bridge Engineering Co. Ltd is the only company that undertakes the construction of the main bridge, while China Railway Group Limited, a Chinese government-nominated contractor, is implementing the rail link project on the bridge, according to state-run Bangladesh Sangbad Sangstha news agency.

Once constructed and in operation, the bridge will directly connect capital Dhaka to 21 southern districts, through road and railways and contribute to boost the Gross Domestic Product (GDP) of the country, Abu Ahmed, a professor of economics at Dhaka University, told Anadolu Agency.

"We cannot exactly say whether this project will contribute to GDP by 1.2% or 2% right now. But the connectivity will play a significant role in trade and commerce with country’s whole southern block," he said.

There is huge possibility of developing many new industries in country’s southern part with the new mega bridge. "It will not only help the fate of around 40 million people of the region but also help bolstering country’s overall economy," he said.

The direct connectivity between Dhaka and the China-assisted strategic Payra Sea Port on the banks of the Bay of Bengal in southern Patuakhali district, which is now under construction, will also be ensured with the Padma Bridge.

"As the port will have direct connection to the bridge, large scale products and goods can be quickly delivered to the capital via road or rail", Ahmed added.

The bridge will reduce the distance between the southern region and Dhaka by 100-150 kilometers, saving at least 3-4 hours of travel time.

During harsh weather conditions, millions of people are currently left without alternative ways of travel when ferry and other water-vehicle communications are postponed. There are even records of 3 to 4-day deadlocks in a row.

There is also a huge rush of home-goers that causes day-long gridlock in the ferry communication at the river Padma during long vacations.

Thousands of families, hailed from the districts located on the other side of river Padma, have been living in the capital, one of the mostly populated cities in the world burdened with over 15 million inhabitants.

Once the easy communication is ensured through the bridge, many families are interested in moving back to their native districts.

"I must shift my family as it will take at best only one and half hour to reach Dhaka from my native town Madaripur by train if Padma Bridge is completed," Bashir Ahmed, a private job holder living in Motijheel neighborhood of the city, told Anadolu Agency.

Nasrin Begum, a housewife in Dhaka’s Naya Paltan area hailed from Shariatpur district, added that her family is also interested in moving to their home village once the bridge offers proper railway facilities.

Keywords:
BangladeshMultipurpose Padma Bridge
Your comment has been forwarded to the administrator for approval.×
Warning! Will constitute a criminal offense, illegal, threatening, offensive, insulting and swearing, derogatory, defamatory, vulgar, pornographic, indecent, personality rights, damaging or similar nature in the nature of all kinds of financial content, legal, criminal and administrative responsibility for the content of the sender member / members are belong.
Related News