AVA, Bangladeshi salvage workers neared on Monday the end of their search for victims of the collapse of a factory building, scouring the basement of the complex that crumbled in on itself killing 1,127 people. 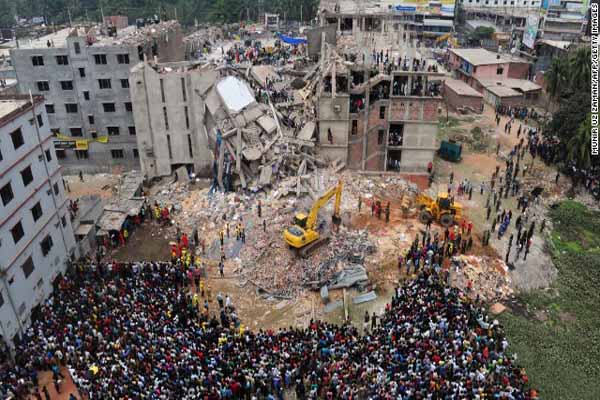 That toll from the world's worst industrial accident since the Bhopal disaster in India in 1984 could be the final one as no more bodies were found on Monday, a spokesman at the army control room coordinating the salvage operation said. "The rescuers have reached the basement where the chances of finding more dead bodies are very low," said the spokesman, Captain Tazul Islam. The site would be handed over to the district administration on Tuesday, upon completion of the salvage work, said army spokesman Shahinul Islam.

A series of deadly incidents at factories, including a fire in November that killed 112 people, has focused global attention on safety standards in Bangladesh's booming garment industry.

Eight people were killed in a fire at a factory last week, which an industry association said may have been started deliberately.

About 2,500 people were rescued from the Rana Plaza, in Savar, a commercial suburb of the capital, Dhaka, after the April 24 collapse. Many of those saved suffered serious injuries.

The disaster, believed to have been triggered when generators were started up during a blackout, has raised questions about the use by Western retailers of the impoverished South Asian nation as a source of cheap goods.

Nine people have been arrested in connection with the disaster, including the building's owner and bosses of the factories it housed.

The government has accused the owners and builders of the eight-storey complex of using shoddy building materials, including substandard rods, bricks and cement, and not obtaining the necessary clearances.

Bangladesh's garment industry accounts for 80 percent of the country's exports.