LONDON - 20th January 2017 marks the 27th anniversary of the Black January tragedy, military occupation and indiscriminate killing of civilians in Baku, Azerbaijan by the Soviet troops on 19-20 January 1990. 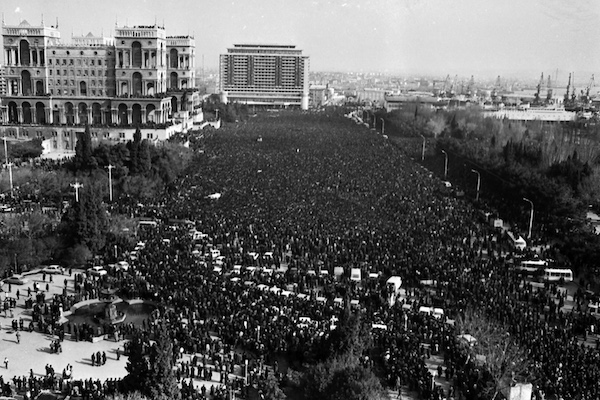 The heavy-handed crackdown resulted in indiscriminate killing of 137 civilians with more than 800 injured and many others went missing. As part of the military occupation called “Strike” (Udar), the State TV building was attacked, resulting in the cutting off the power supply that aimed to prevent the dissemination of the news of the military occupation of Baku to the international community.

Since then the 20th January has been commemorated as a national mourning day as Black January or Black Saturday, both in Azerbaijan and by Azerbaijani communities around the world. January 20th is a national mourning day in Azerbaijan with nationwide commemorations taking place and the national flag flying at half-mast over the public buildings and diplomatic missions abroad. The 20th January events are also considered a milestone on the journey to regaining Azerbaijan’s independence from the Soviet Union. The events shook the foundations of the Soviet rule in Azerbaijan and subsequently led to the regaining of independence on 18 October 1991.

According to Human Rights Watch report on Black January: "The violence used by the Soviet Army on the night of January 19–20 was so out of proportion to the resistance offered by Azerbaijanis as to constitute an exercise in collective punishment. ............the punishment inflicted on Baku by Soviet soldiers may have been intended as a warning to nationalists, not only in Azerbaijan, but in the other Republics of the Soviet Union”.

In its editorial dated 4 January 1995 The Wall Street Journal stressed that the then Soviet leader M.Gorbachev chose to use violence against "independence-seeking Azerbaijan."

As the Azerbaijani community in Britaain get together to pay their respects to the victims of the Black January tragedy, Ambassador Tahir Taghizadeh reflected on tragic events:  “Today our people, both in Azerbaijan and abroad, remember the victims of Black January tragedy. It goes without saying that this is one of the most tragic and at the same time heroic moments in our history. However, it also opened a new chapter, a chapter full of heroism, great patriotism and selfless willingness on the part of our nation and a milestone on the journey to independence of Azerbaijan. It is one of the proudest moments in the recent history of Azerbaijan and we take great pride in the fact that our people’s fight for independence shook the foundations of the Soviet regime. It is my firm belief that the nation of Azerbaijani will continue its struggle until the perpetrators of this crime are brought to justice”.