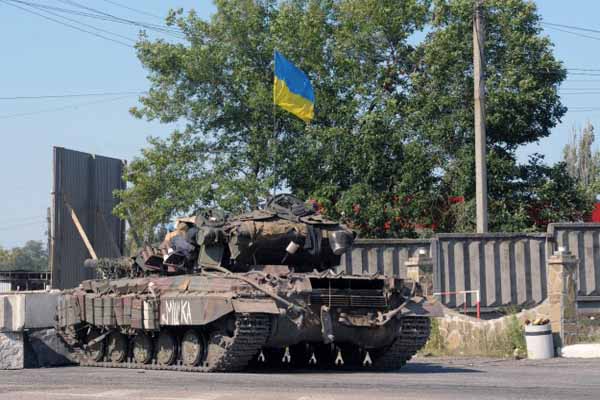 Ukrainian anti-terror operations press service said Monday that two voluntary groups killed 90 pro-Russian separatists in Ilovaysk city in the Donetsk Province where severe fighting continues since August 18. The Ukrainian army killed 10 Russian mercenaries and destroyed a gun store controlled by pro-Russian separatists. Separately, 150 “mercenaries” were killed after the pro-Russian separatists convoy was bombed in Olenivka city in Donetsk, the statement said, adding that in the operation, seven tanks and heavy artillery were also destroyed. In a statement published on Twitter on Sunday, National Security Council’s Spokesperson, Andrei Lysenko, said that 722 soldiers were killed and 2,625 others have been injured since the launch of the anti-terror operation in April. Ukraine launched its ‘anti-terror operation’ in mid-April to restore government control over the regions of Donetsk and Luhansk where Russian separatists declared independence from Kiev. Ukraine’s new president, Petro Poroshenko, gave a new boost to the operation after he assumed office on June 7. The tension in the region reached a new high during the last few days as an unauthorized Russian aid convoy entered the country while Kiev declare