Dozens of jets were involved in six hours of bombing in the early hours of Tuesday, Anadolu news agency reported. 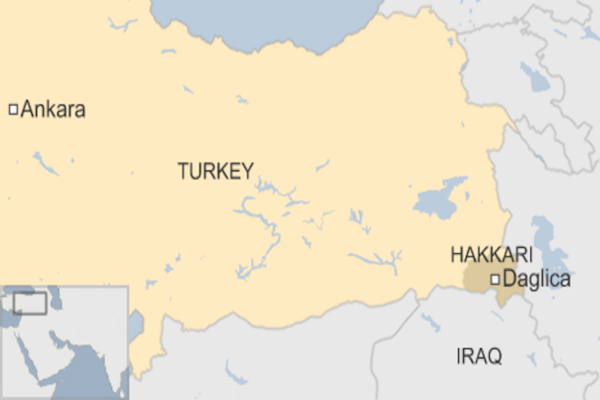 Dozens of jets were involved in six hours of bombing in the early hours of Tuesday, Anadolu news agency reported.

Bombs had been detonated near two military vehicles in the village of Daglica, a mountainous area close to the border with Iraq.

Mr Davutoglu responded by telling reporters Turkey would not be discouraged from its "war on terror". "Those mountains will be cleared of these terrorists. Whatever it takes, they will be cleared."

At least 35 PKK (Kurdistan Workers' Party) rebels were killed in air raids by F4 and F16 jets early on Tuesday, according to Anadolu.

The attacks are the latest in a surge in violence between the army and the PKK since a ceasefire collapsed in July.

More than 40,000 people have died since the PKK launched its armed campaign in 1984, calling for an independent Kurdish state within Turkey.

After President Erdogan's remarks on the PKK attack, about 200 people chanting slogans in his support attacked the offices of Turkish newspaper Hurriyet in Istanbul.

They accused the news organisation of misquoting Mr Erdogan and implying that he was trying to gain political capital from the Daglica attack.

Hurriyet has attracted criticism from pro-government circles over its coverage of the conflict between Turkey's government and the PKK.

The government says military operations against the Kurdish rebel group will continue until it withdraws from Turkish soil and disarms.

Curfews have been imposed in several towns where clashes take place and over a hundred districts have been declared "temporary security zones".

In response, several municipalities in the predominantly Kurdish east and south-east of Turkey have announced "self-rule".

Critics accuse President Erdogan of renewing violence to curb the support for the pro-Kurdish People's Democratic Party (HDP), whose 14% share of the vote in June elections cost the governing AKP its majority in parliament.

The government denies these accusations. Many people fear the clashes will mount as snap elections scheduled for November draw closer.