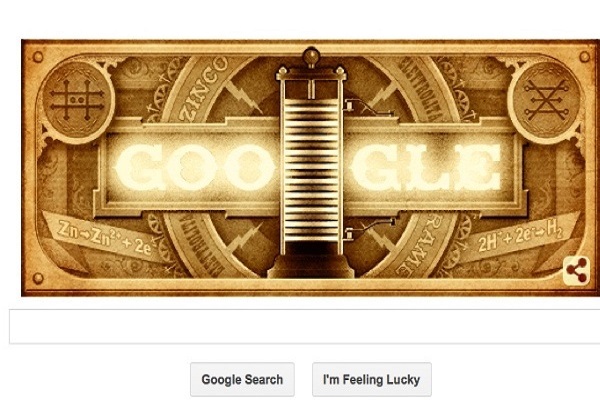 Every historian suffers it, every now and then. It’s that moment when you jump up and down and point at [insert period drama here] on the TV and loudly tell all the poor unsuspecting people in the room, “it wasn’t like that. They got it wrong.” This is often tempered by a moment of reluctant admission that, well, I suppose they tried, and maybe that scene was actually all about the subtly growing on-screen romance that my outburst rudely interrupted. And so, once again we try to rein in our inner grumpy historian, and try to keep the one or two friends who are still prepared to go to the cinema with us.

With this in mind, I should resist the urge to point and shout at today’s Google doodle marking the 270th birthday of the Italian natural philosopher Alessandro Volta. OK, the flashing lights might imply he helped invent electrical lighting (he didn’t), and the chemical equations suggest a knowledge of chemical theory that didn’t come along until much later. But more interesting than my smugness at knowing these things is the fascinating research that Volta and his contemporaries really did.

In 1799 Volta was experimenting with some curious phenomena that had been discovered by fellow Italian Luigi Galvani in the 1780s. Galvani had found that the muscles of dead frog’s legs could be made to twitch by touching the nerves with two pieces of metal. After several years work, and isolating the experiment from outside forces as well as he could, Galvani concluded that there was an “animal electricity” that came from within the frog. His work was intriguing, and easy to repeat. Interested natural philosophers from across Europe began experimenting and debating the new electricity.