Russian carrier Aeroflot has stripped a passenger of his air miles for breaching its rules by sneaking his overweight cat aboard a flight. 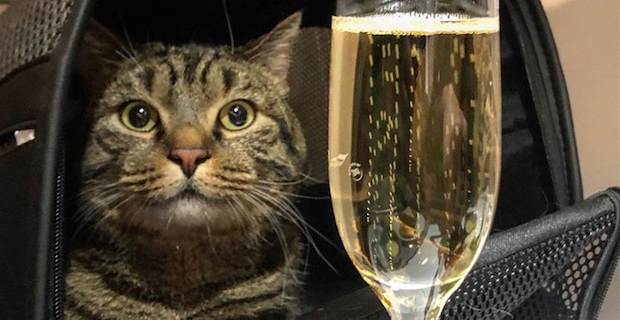 Mikhail Galin, 34, took his cat Viktor on board flight SU1702, from Moscow to Vladivostok, Aeroflot said. Under Aeroflot's rules, pets weighing more than 8kg (17lb) must be placed in the luggage hold. Because Viktor was too heavy for the passenger cabin, Mr Galin devised a cunning plan. He swapped Viktor for a smaller cat during check-in to get around the weight restrictions. The airline said because Mr Galin had broken the rules it had "taken the decision to take this passenger out of its frequent flyer programme".

"All of the miles collected during his time in the programme will be annulled," the airline said.

How did he smuggle the cat on board?

Mr Galin revealed how he had sneaked Viktor on board the flight earlier this month in a Facebook post that vent viral.

In the post, Mr Galin said he had had Viktor with him on a flight from the Latvian capital Riga to Russia's far eastern city of Vladivostok, which included a stopover in Moscow.

But when he tried to board the second leg of the flight in the Russian capital, Aeroflot staff would not allow him to take Viktor into the passenger cabin.

"The weigh-in showed that the animal had fattened up to 10 kilograms, a level not allowed for the cabin," Mr Galin wrote.

Unwilling to place the cat in the luggage hold, Mr Galin delayed his flight and took the "strategic decision to find a similar cat of a lower weight" in Moscow.

A day later Mr Galin returned to the airport with the smaller "cat double", which passed the weight limit test at the check-in desk.

Mr Galin then gave the smaller cat back to its owners at the airport before boarding the plane to Vladivostok with Viktor.

His mistake, it seems, was posting on Facebook about the "operation to replace the fat cat Viktor". A picture on his public profile shows Viktor sitting on the plane next to a glass of sparkling wine.

The post drew the attention of Aeroflot, prompting it to launch an investigation that confirmed the cat swap on CCTV.

In another post, Mr Galin appeared to accept his punishment with good humour. He shared a picture of Viktor as a kitten, "when his weight still met the requirements of the air carrier".

Keywords:
AeroflotFat Cat
Your comment has been forwarded to the administrator for approval.×
Warning! Will constitute a criminal offense, illegal, threatening, offensive, insulting and swearing, derogatory, defamatory, vulgar, pornographic, indecent, personality rights, damaging or similar nature in the nature of all kinds of financial content, legal, criminal and administrative responsibility for the content of the sender member / members are belong.
Related News