On TV, character actor Ryall appeared in many well-known shows including The Singing Detective, Holby City, Casualty, Midsomer Murders, Goodnight Sweetheart and the Andrew Davies version of House Of Card, 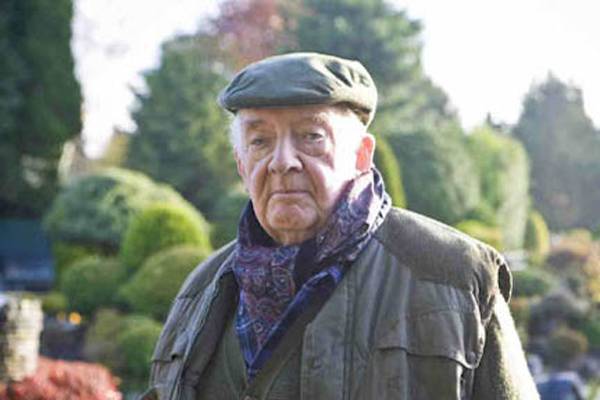 Ryall had a five-decade career across film, TV and theatre, including in movie The Elephant Man and on TV, The Village and Outnumbered. Daughter Charlie Ryall said: "Please take a moment to remember his huge five-decade-spanning career outside of the more well-known TV & film." In a tweet, Sherlock writer Mark Gatiss called Ryall "a twinkling, brilliant, wonderful actor I was privileged to call a friend. RIP".

David Ryall had a long and wide-ranging career across film, TV and theatre Actor David Ryall, known for playing Elphias Doge in the Harry Potter Deathly Hallows film, has died aged 79. The actor passed away on Christmas Day but no more information has been given.

Gatiss directed Ryall in TV movie The Tractate Middoth in 2013. Outnumbered David Ryall played the grandfather in Outnumbered Ryall replaced Peter Cartwright as Elphias Doge in 2010's Harry Potter and the Deathly Hallows Part 1. His character was a close friend of Albus Dumbledore in addition to being a Ministry of Magic jurist and an Order of the Phoenix member. His other film roles included parts in 2004's Around the World in 80 Days, 1990's Truly, Madly, Deeply and 1980's The Elephant Man.

On TV, character actor Ryall appeared in many well-known shows including The Singing Detective, Holby City, Casualty, Midsomer Murders, Goodnight Sweetheart and the Andrew Davies version of House Of Cards. Most recently, he was perhaps best known as Frank, the grandfather who suffers from dementia, in BBC comedy Outnumbered. He is also recognisable to TV viewers as Britain's oldest man Old Bert, the narrator of BBC One's The Village, who recalls his life through a series of flashbacks. He also appeared in the Sky One comedy Trollied and in BBC drama Our Girl. Celluloid Dreams He played alongside Diana Rigg in 1977's TV drama Celluloid Dreams

On Twitter, fans and colleagues of the actor paid tribute.

"So very sad to read of the death of actor David Ryall may he RIP," said Colette Mayer.