At least 50 people are dead and 53 injure in Orlando 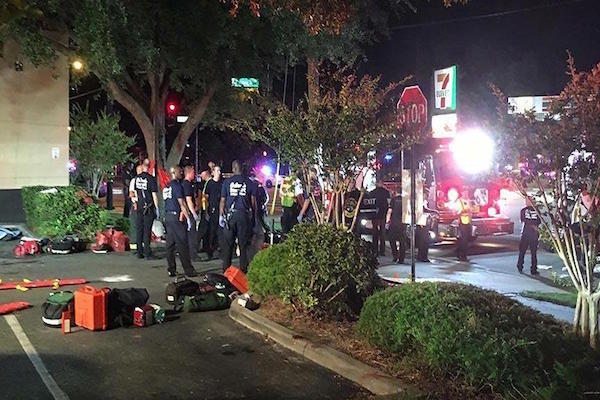 The shooter, who attacked a gay nightclub in the early hours of Sunday morning, has been identified by Congressman Alan Grayson as Omar Mateen, a 29-year-old U.S. citizen from St. Lucie, Florida.

An FBI agent told reporters the suspect has not been positively identified by his next of kin, but added that there were no other suspects being investigated.

It has emerged that Mateen called 911 minutes before launching the onslaught in Pulse Club and declared his allegiance to the Daesh terrorist group, FBI officials confirmed.

President Obama said the motive for the shooting was not clear but the FBI was investigating it as an "act of terrorism".

A state of emergency has been declared in the state of Florida, Mayor Buddy Dyer told reporters.

This is "a tragedy of unimagined proportions", he told local WESH 2 television, adding, "We are a strong, resilient community. We are going to support those families" who are mourning loved ones killed in the shooting.

The family of the alleged shooter issued an apology Sunday.

“We are saying we are apologizing for this whole incident. We weren’t aware of any action he is taking. We are in shock like the whole country. This had nothing to do with religion,” according to Mir Seddique, the alleged shooter’s father.

He also suggested that his son’s motive for killing dozens of people at a gay bar might be homophobia, citing an incident a couple of months ago when Mateen was angry at seeing two men kissing each other on the street in Miami.

Grayson said the attack was “ideologically motivated”, echoing earlier police reports that Mateen had “radical Islamic leanings”. The attack at a gay nightclub may have been an “awful hate crime” against the LGBT community, according to the congressman.

FBI agent Ron Hopper said the nationality of family members was “indicative” of Islamic extremism involved in the incident.

He said the agency had been aware of Mateen, who was born in New York, since 2013 and had two interviews with him in 2013 and 2014 that “proved to be inconclusive”.

Mateen was not currently under surveillance, Hopper said.

An officer with the ATF, the federal law enforcement agency on firearms, said Mateen legally purchased two weapons, a hand gun and a long gun, within the last few days.

Meanwhile, Santa Monica police have confirmed that a heavily armed man was arrested in South California while on his way to a gay pride parade in the West Hollywood area of Los Angeles.

In Orlando, a hospital official at a briefing early Sunday said “many” of the injured were in critical condition.

Anxiety and desperation were reported at hospitals in the area as families arrived to find information about their loved ones. Local TV stations are making appeals for blood donations.

WESH 2 footage taken near a location where donations are accepted showed hundreds of citizens turning up to donate blood, forming a long line that circled the building.

Muhammad Nusri, a senior imam with the Islamic Society of Central Florida, said he was “heartbroken” and stood in solidarity with city officials “in this hour of horror that was brought upon our city”.

Nusri said the perpetrator was “not known to be connected with any network” and urged the media to exercise “caution from rushing to judgment and sensationalizing the story”.

Mina said the police decided to "rescue hostages that were in there" at 5 a.m. (0900GMT), suggesting Mateen had free reign inside the club for nearly three hours.

He said nine officers entered the club and engaged the attacker, who carried an AR-15 type assault rifle, a handgun, and a “suspicious device” police officers have yet to identify but have cleared from the area.

The shooter was killed and one officer was injured in the shootout, during which 30 people were rescued. WESH 2 reported that officers used a distraction explosion as a police vehicle drove through the club’s wall to engage the shooter.

Another device, potentially an explosive, was found in the shooter’s van, police said.

Orlando Police Department later tweeted a picture of the Kevlar helmet the injured officer was wearing, with a visible bullet hole right in front.

The White House issued a statement saying President Obama was receiving regular updates about the situation. “Our thoughts and prayers are with the families and loved ones of the victims,” it said.

Democratic presidential candidate Hillary Clinton tweeted briefly about the shooting. “Woke up to hear the devastating news from FL. As we wait for more information, my thoughts are with those affected by this horrific act,” she said.

Mayor Dyer said the club has been cleared and there was no continued threat to the community, while confirming as many as 300 people were inside at the time of the attack.

The shooting was first reported online at 2.09 a.m. by the club on their Facebook page: "Everyone get out of Pulse and keep running," read a post.

A video captured outside the club and shared online carried the sounds of more than a dozen shots fired in rapid succession.

Dyer described the incident as a "horrific crime" that will have a "lasting effect" on the local community, while an Orange County sheriff said the shooting was treated as a "domestic terror incident”.

Pulse calls itself “more than just another nightclub” aimed at raising awareness about the LGBT community.

The area around the shooting remains under police lockdown as a large-scale investigation continues.