4 killed in Egypt protests, including a child 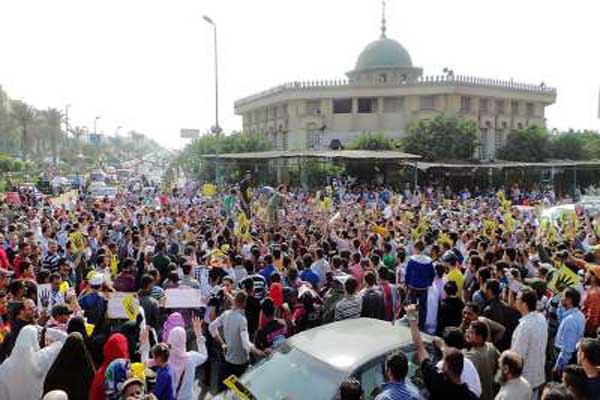 A coalition of Islamist groups that call for the reinstatement of ousted President Mohamed Morsi has asserted that at least four protesters were killed in clashes that accompanied countrywide demonstrations on Friday, while authorities say only one death was reported.

Friday's rallies – held under the banner "Women are a redline" – were called by the National Alliance for the Defense of Legitimacy, a Muslim Brotherhood-led coalition of pro-Morsi Islamist groups, to protest what it describes as recurrent police violence against women and minors.

According to an alliance source, at least three protesters were killed and 50 injured in clashes between Morsi supporters and opponents in the capital's Omraniya district.

The assertion was challenged by the Interior Ministry, however, which declared that only one person – a 12-year-old child – had been killed and another three injured.

The source from the pro-Morsi alliance said that a fourth protester had been killed after being shot in the head during clashes with security forces in the canal city of Suez.

An official medical source, however, said the protester had suffered a serious head injury but was nevertheless still alive.

Violence also erupted between supporters and opponents of the ousted president in Alexandria's Sidi Bishr district, where security forces used teargas to break up the warring sides.

According to a security source, two people were injured and four others arrested.

Sources within the pro-Morsi alliance, however, said that at least 77 people had been injured in the melee and 12 arrested.

Meanwhile, four people were injured while taking part in a pro-Morsi rally in Zagaziq in the Nile Delta province of Sharqiya, where demonstrators said they heard shotgun reports.

Skirmishes were also reported in the vicinity of Cairo's Quba presidential palace after a protester was injured in a car accident.