Twenty two people, including children, have been killed and 59 injured in a suicide attack at Manchester Arena. 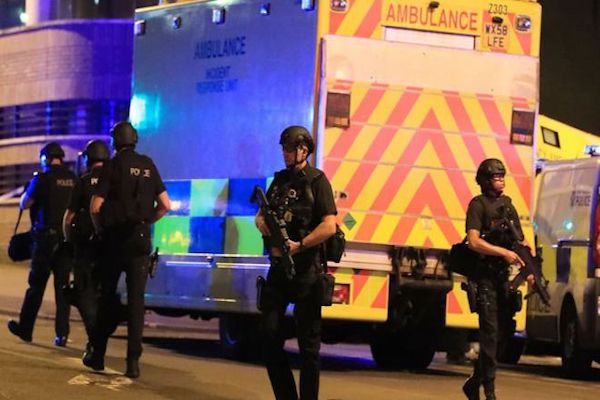 Police said the lone male attacker, who died in the blast, detonated an improvised explosive device. Relatives are using social media to hunt for missing loved ones, and an emergency number, 0161 856 9400, has been set up. Sixty ambulances attended the incident and those wounded are now being treated at six hospitals around the city. Chief Constable Ian Hopkins said it was "the most horrific incident" Greater Manchester had ever faced. He said the "fast-moving investigation" was now working to establish whether the attacker "was acting alone or as part of a network". Eyewitnesses described seeing metal nuts and bolts among the debris, and spoke about the fear and confusion that gripped the concert-goers. Andy Holey, who had gone to the arena to pick up his wife and daughter, said: "An explosion went off and it threw me about 30ft from one set of doors to the other set of doors. "When I got up I saw bodies lying on the ground. My first thought was to go into the arena to try to find my family." Emma Johnson said she and her husband were at the arena to pick up her children, aged 15 and 17.