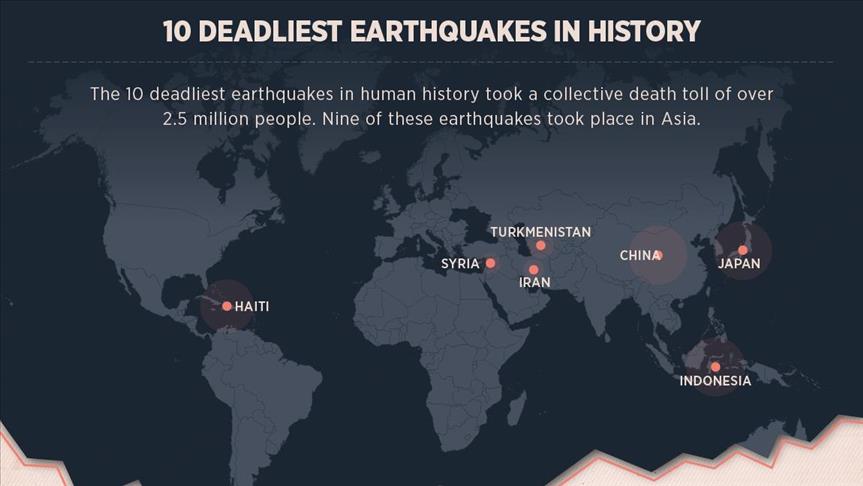 AVRUPALONDON - Nine of these earthquakes took place in Asia. The most casualties in an Asian quake were seen in China, with some 1.3 million people losing their lives in three quakes, according to the U.S. Geological Survey.

The Jan. 23, 1556 earthquake in the northwestern province of Shaanxi (formerly Shensi) was the deadliest earthquake in history. It is estimated that the magnitude of the quake, which took place during the Ming Dynasty, was 8. Nearly 830,000 people are believed to have died.

Two other of the deadliest earthquakes took place in Iran over 1,100 years ago. According to verbal and written sources, 350,000 people lost their lives in the two quakes.

The deadliest earthquakes in history:

The Shaanxi earthquake is known as the deadliest earthquake in history. It took place in the northwestern Shaanxi province (formerly Shensi) on Jan 23, 1556. 830,000 people are estimated to have died in in the 8-magnitude quake.

Some 840 kilometers of the area were devastated by the quake, and nearly 60 percent of the region’s population lost their lives.

The second-deadliest earthquake also happened in China. The Tangshan quake -- causing the most casualties in the last hundred years -- hit the industrial city of Tangshan on July 28, 1976. Some 255,000 people died in the 7.8-magnitude earthquake, and an 800,000 were injured.

The earthquake destroyed nearly 180 buildings in only about 10 seconds, and caused damage as far away as Beijing.

The third-deadliest earthquake in history struck the northern Syrian Aleppo province on Oct. 11, 1138. More than 230,000 people lost their lives. The magnitude of the quake is unknown.

Fourteen countries in the South Asian and African coasts of the Indian Ocean were affected by 9.1-magnitude earthquake which hit Indonesia’s island of Sumatra. More than 227,000 people lost their lives and 50,000 people disappeared in Indonesia in the quake and subsequent tsunami. Nearly 1.7 million people were displaced.

Approximately 222,000 people died in this magnitude 7 earthquake in Haiti, and more than 300,000 people were injured. 1.3 million people were displaced by the quake, and nearly 100,000 houses were destroyed.

More than 200,000 people were killed in the 7.9-magnitude earthquake that struck Iran’s northeast Semnan province in the Damghan region. The sixth-deadliest quake took the most casualties in Iranian history.

The Kanto quake was the deadliest in Japan's history. 142,000 people were killed in the 7.9-magnitute earthquake, which brought extreme destruction to the Tokyo-Yokohama area. More than 380 houses burned after the earthquake as well.

More than 110,000 people were killed in the 7.3-magnitude earthquake that took place on October 5, 1948 in Ashgabat, the present capital of Turkmenistan.