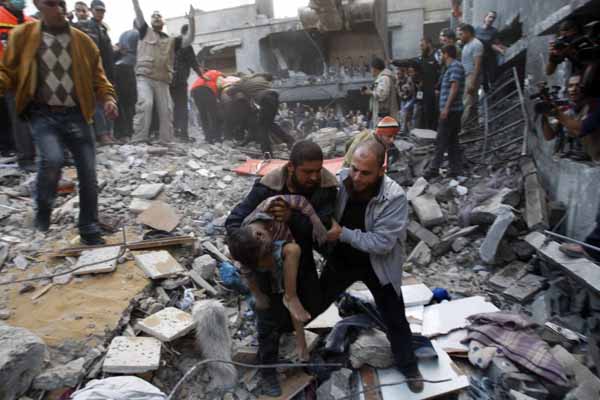 At least ten Palestinian children were killed and others injured on Monday by an Israeli strike on the western Gaza City Al-Shati Camp and the clinics of Al-Shefaa Hospital, local Palestinian media reported. Anadolu Agency could not immediately obtain comments from the Palestinian Health Ministry on this report. Palestinian media said the Israeli army had shelled a public park at Al-Shati Camp, leaving several children dead. It added that the Israeli army had also shelled the clinics of Al-Shefaa, by far the largest medical center in the Gaza Strip, leaving several people injured. At least 1045 Palestinians have been killed and more than 6235 others injured in relentless Israeli attacks on Gaza since July 7, according to the Palestinian Health Ministry. Israel's current offensive – codenamed "Protective Edge" - is the self-proclaimed Jewish state's third major offensive against the densely populated Gaza Strip - home to 1.8 million Palestinians - within the last six years.