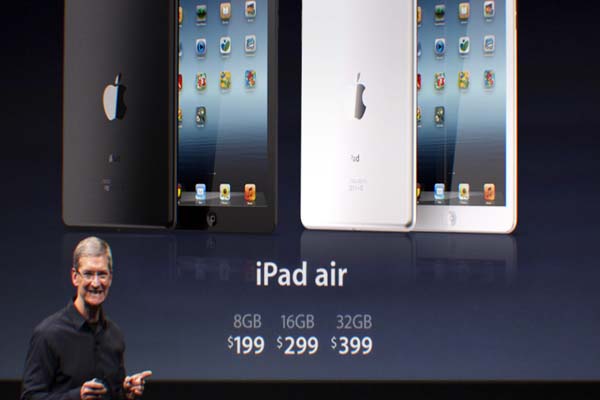 The debut of the one-pound iPad Air and MacBook Pro with sharper 'retina' display repeats a pattern of recent launches with improvements in existing lines rather than totally new products, and Apple shares fell 0.3 percent for the day. Apple said upgrades to its Mac operating system and iWork software suite, which compete with Microsoft Corp's Excel, Word and other applications, will now be offered for all MacBooks and Mac computers. That brings Apple's model of free system software upgrades on phones and tablets to the computer market, where Apple is still the underdog to Microsoft's Windows. Apple may be trying to safeguard its grip on mobile software as Microsoft revs up its Windows-powered Surface Pro, which runs applications, such as Word or Excel, that are the standard for business customers, analysts said. "We are turning the industry on its ear, but this is not why we're doing it," Apple Chief Executive Tim Cook told media and technology executives at San Francisco's Yerba Buena Center. The market is awash in inexpensive tablets running Google Inc's Android software, but the company may be focused on fending off a threat from the high end. "In the tablet PC market, they do think Microsoft is a bigger threat than Android," said Gartner analyst Carolina Milanesi. "The iPad Air will compete with Surface Pro, not some rinky-dink Android tablet." Gartner estimates that Apple's share of the global tablet market will slip to 47.2 percent in 2014, with Android-based tablets just overtaking Apple's this year. The IT research outfit expects Microsoft tablets to grab 3.4 percent of the market this year, double the 1.7 percent forecast for 2013.

Microsoft gets 65 percent of its Windows revenue, which totaled $19.2 billion last fiscal year, from PC manufacturers which put the system on its machines, and 35 percent from other sources, chiefly people and businesses buying its software separately to install themselves.

The latest version of Windows, when bought separately to install on an old computer, starts at $120 for a home version and goes up to $200 for the full ‘Pro' version. The latest Windows 8.1 upgrade was free for customers running Windows 8.

Apple's product launches on Tuesday were evolutionary, with the new iPads equipped with faster processors and better screens. Cook, at an industry conference in May, had hinted at "several more game changers" from Apple which could include wearable computers, but had not given a time frame.

"As always with Apple, expectations on systematic breakthrough hardware innovations are irrational," said Forrester analyst Thomas Husson said. "Apple is good at inventing new products and at maximizing profitability of its product range over time through software innovations and clever marketing."

Apple's new iPad Air - its full-size tablet - is about 20 percent thinner than the previous generation of tablets, weighs one pound and starts at $499. It will go on sale on November 1.

The iPad mini now has a "retina" high-resolution screen and starts at $399, compared with $329 for the previous mini model. The two new tablets would face stiff competition, with Microsoft, Nokia and Amazon.com Inc all plugging rival devices in coming months.

Apple also showed off a new Mac Pro, a premium and high-powered cylindrical desktop computer that will be assembled in United States. It had shown the computer at a previously event.

For the first, Apple will launch the new iPads simultaneously in the United States and China, its biggest market, which is also a key growth region.

Apple, which jumpstarted the tablet computing market in 2010 with the first iPad, has already come under increasing pressure from cheaper devices ranging from Amazon's Kindle Fire to Samsung Electronics Co Ltd's Note.

But while Apple is ceding market share to rivals, its superior library of apps and content should safeguard its lead for years to come, analysts say. Longer term however, investors hope to see real device innovation from a company that has not unveiled a new breakthrough product in years.