Sofuoglu became the most successful rider in World Supersport history in terms of race and championship wins. 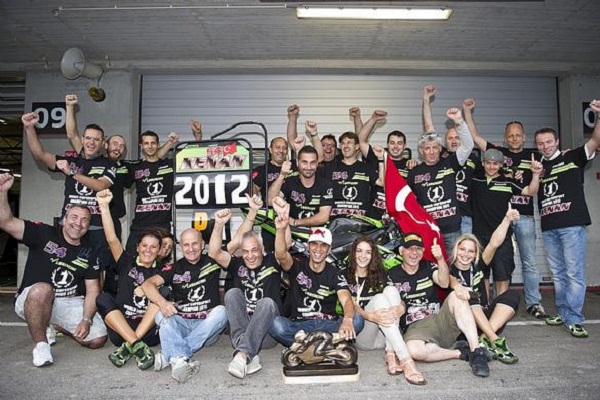 Kawasaki's Kenan Sofuoglu was crowned 2012 World Superbike Champion at Portimao today, coming in second behind the PTR Honda of Jules Cluzel but it was enough to give the Turk his third middleweight crown.

Kenan Sofuoglu who by finishing second and secured his third World Supersport crown of his illustrious career. Sofuoglu said: “I knew I only had to finish fourth even if Cluzel won the race, but on the last two laps I realised I could at least finish on the podium so I opened the throttle some more. It is a great feeling to win the championship again and I am so happy to do it here at Portimao because I could not handle the stress of having to wait another two weeks until Magny Cours!”

By winning his third title, Sofuoglu became the most successful rider in World Supersport history in terms of race and championship wins.

He competed in Moto2 for the Technomag-CIP team, having made his debut at the end of 2010 and remained with the team for the 2011 season.[1] He previously won the Supersport World Championship for the Ten Kate Honda in 2007 and 2010, and he is the championship's all-time leading race winner, having won 17 races. He raced in the World Superbike Championship for Ten Kate in 2008, but with limited success.

Racing for Kawasaki in 2012, Sofuoğlu claimed his third Supersport World Championship after the Portuguese Grand Prix, one race before the last race.