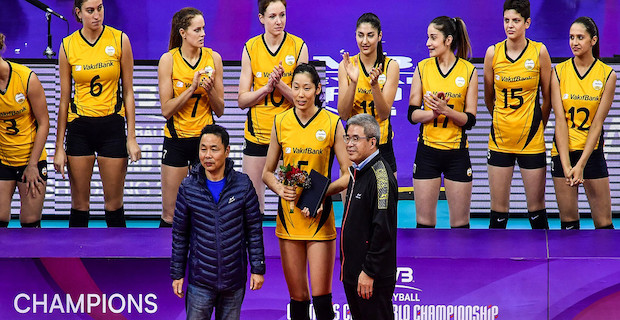 The Vakifbank women's volleyball team returned to Turkey in high spirits after winning the world championships.

On Sunday, the club won the FIVB Volleyball Women's Club World Championship in China, its second win in a row. The club won the title in 2012, 2017 and 2018.

Speaking about their victory to Anadolu Agency on Thursday, star player Kelsey Robinson said: "I think it was a team effort. l think every single player and staff was giving as much as they could and l am very proud of it."

About her future in Vakifbank, she said: "As long as they want me. But, for now, l am here for this season."

Sharing her experience with the Turkish club, the American player said: "It is always about being the best team we can be. Whatever that means, however we can achieve that, l think that is the most important goal."

Turkish clubs have won the title six times in the last nine years.

Talking about the reaction from her country for this victory, she said: "Everybody is really happy for me and very proud of me. It is an honor to bring this award home with me to America and share that with my friends and family."

On team spirit, she said: "It is about being big sisters to them and helping them off the court and on the court and guiding them and being good role models and giving them confidence in the game."

"He is the best coach in the world for me. He takes something out of you that maybe you do not believe in yourself, but he makes you believe, he makes you see that you can be more than what you think you are capable."

Coach Guidetti said: "My goal is to make my team shine."

"It was one tournament that we played very well. In this season, many teams spent a lot of money and they become very strong. But, at the same time, we know our strength. We know we can compete against everybody," he said, adding that he was looking forward to more victories.

When asked if the winning streak will continue, Vakifbank Sport Club President Osman Demren said: "It would be hard to repeat these victories."

"There are incredible clubs in Turkey, Italy and Brazil. We compete with Brazilian teams in China. These teams played high level volleyball and if we would show some weakness, they would beat us," Demren added.

Turkey topped this year’s women championship by winning 6 gold, 1 silver, and 3 bronze medals in the tournament.

Keywords:
Kelsey RobinsonVakifbank
Your comment has been forwarded to the administrator for approval.×
Warning! Will constitute a criminal offense, illegal, threatening, offensive, insulting and swearing, derogatory, defamatory, vulgar, pornographic, indecent, personality rights, damaging or similar nature in the nature of all kinds of financial content, legal, criminal and administrative responsibility for the content of the sender member / members are belong.
Related News