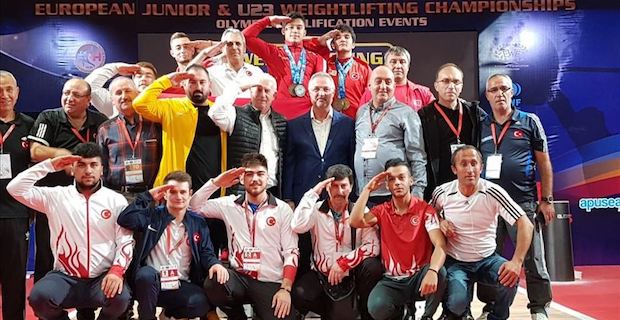 Ozbek claimed the gold in the snatch in the men's 73-kilogram weight class late Sunday by lifting 148 kilograms.

He broke the European record twice in the clean and jerk by lifting 181 kilograms and 329 kilograms, respectively.

In the same class, Batuhan Yuksel won a silver medal in the clean and jerk by lifting 177 kilograms and the bronze with a total of 312 kilograms.

At the end of the fourth day of the championship, the national athletes brought home a total of 22 medals, including nine gold, five silver and eight bronze.

Turkey's Youth and Sports Minister Mehmet Muharrem Kasapoglu congratulated the athletes in a statement issued by the ministry.

Keywords:
Turkish WeightlifterWeightlifterYouth Championships
Your comment has been forwarded to the administrator for approval.×
Warning! Will constitute a criminal offense, illegal, threatening, offensive, insulting and swearing, derogatory, defamatory, vulgar, pornographic, indecent, personality rights, damaging or similar nature in the nature of all kinds of financial content, legal, criminal and administrative responsibility for the content of the sender member / members are belong.
Related News