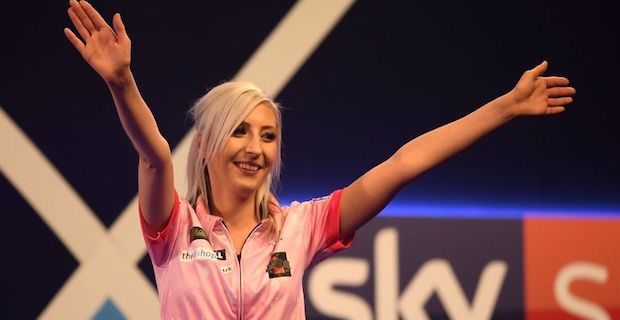 Fallon Sherrock became the first woman to beat a man in the PDC World Darts Championship on Tuesday night. The 25-year-old English woman beat Englishman Ted Evetts 3-2 in the first round to make history in London.

When the sets were tied 2-2 and the Sherrock leading the fifth set's legs 2-1, Evetts could not complete a 129 outing, missing the bullseye.

In Sherrock's turn, the English woman made history, completing a 36 outing with an 18-double at her second throw.

"I can't believe that I've made history," Sherrock said. "I feel really happy because I have proven something for women's darts, that women can play the men and beat them, so fingers crossed this is a move in the right direction."

The 2019 William Hill World Darts Championship is taking place at Alexandra Palace in London between December 13, 2019 and January 1, 2020.

Michael van Gerwen is the defending champion, after defeating Michael Smith 7-3 in the 2019 final.

Last year, the tournament organization announced on its website that the annual event had an expansion, allowing a total of 96 players to participate, also reserving two spots for female players.

"We also felt that it was important to guarantee two places for female players, which will go to qualifiers from the UK and Rest of the World," a statement published on June 2018 at Professional Darts Corporation's official website said.

Sherrock will face Austria’s Mensur Suljovic in the second round.

Keywords:
Fallon SherrockWorld Darts
Your comment has been forwarded to the administrator for approval.×
Warning! Will constitute a criminal offense, illegal, threatening, offensive, insulting and swearing, derogatory, defamatory, vulgar, pornographic, indecent, personality rights, damaging or similar nature in the nature of all kinds of financial content, legal, criminal and administrative responsibility for the content of the sender member / members are belong.
Related News