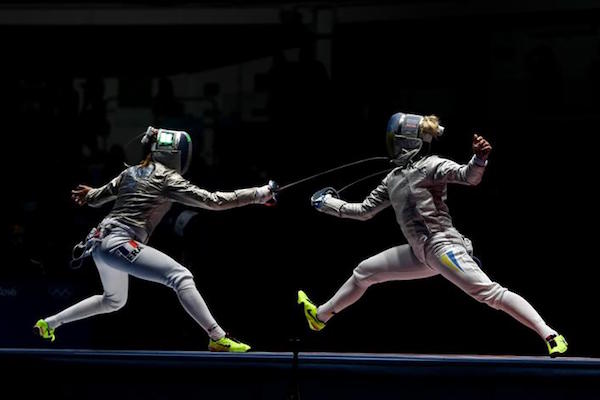 Muhammad won her first match in the women's individual sabre against Ukranian Olena Kravatska, but was knocked out after losing 15-12 to Cecilia Berder of France in the round of 16. The gold went to Yana Egorian of Russia in the competition.

Muhammad still has a shot at gold in the women's team sabre event Saturday.

"A lot of people don’t believe that Muslim women have voices or that we participate in sport,” Muhammad said after being eliminated, according to media reports. “And it’s not just to challenge misconceptions outside the Muslim community but within the Muslim community. I want to break cultural norms."

In other events, host country Brazil won its first gold at the 2016 Games in the women's 57 kilogram (126 pounds) judo tournament when Rafaela Silva from Rio de Janeiro defeated Mongolia's Sumiya Dorjsuren, the world's No. 1 in her weight class.

Japan, too, won its first gold in judo as Shohei Ono defeated Rustam Orujov of Azerbaijan in the men's 73 kg (161 pounds) event.

In swimming, Ryan Murphy extended the U.S.’s winning streak in the 100m backstroke with an Olympic record time of 51.97, becoming the sixth American to take gold since 1996 in the event.

Katinka Hosszu of Hungary won her second gold of the games with a victory in the 100m backstroke in a time of 58.45, following her first gold in the 400m individual medley.

Michael Phelps, legendary U.S. swimmer and the most decorated Olympian in history with 23 medals, will compete in his fifth Olympic 200m butterfly final Tuesday.

It’s the first time this version of the sport has been played at the Olympics. Rugby sevens is a faster, stripped down adaptation of the event that was played at the games from 1900-1924.

Team USA overcame a sloppy start to defeat Venezuela 116-69 in basketball, to improve to 2-0 at the games. Paul George led the way for the U.S. with 20 points.

“Still in the hospital. Waiting for some research&hope I can leave today. Knowing that this chance is 1 in 4 years, doesn't make it easy," she wrote.