Miami Heat back to offensive after 114-96 win over Pacers 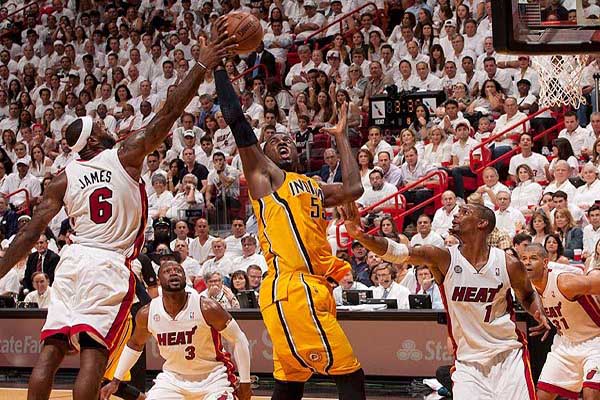 And it worked just as well.

James rebounded from the two late turnovers that cost Miami in Game 2 by scoring 22 points, grabbing four rebounds and dishing out three assists.

Hours after Dwyane Wade learned he would only be tagged with a flagrant foul from Game 2 and not a suspension, he finished with 18 points, eight assists and four rebounds. Chris Bosh added 15 points and three rebounds and all five Miami starters reached double figures.

The move allowed Miami to outscore Indiana 56-32 in the paint.

Perhaps that should be expected from a team with so much scoring punch and that has won 23 of its last 24 on the road, but there were more surprising statistics in other areas.

The Heat shot 54.5 percent against a team that finished the regular season with the NBA’s best defensive field goal percentage and also made 24 of 28 free throws.

They matched the highest scoring output in a quarter during this season’s playoffs with 34, broke the franchise playoff record for points in a half (70) and fell one point short of tying the third-highest point total in a playoff game in franchise history.

But the biggest difference between the first two games and Sunday’s comfortable win was what James’ work on the inside.

Now, with Game 4 scheduled for Tuesday, it’s the Pacers turn to adjust.

David West led Indiana with 21 points and 10 rebounds, while Roy Hibbert had 20 points and 17 rebounds. Paul George finished with 13 points and eight assists, not nearly enough to keep the Pacers perfect at home in the postseason.

Indiana, which fell to 6-1 at home in the playoffs, must win its next home game to even the series again.

“He (James) was in the post doing a lot of work, and we have to do a better job of helping Paul out,” Hibbert said. “LeBron can’t get five or six dribbles to get a post move. ... We have to make adjustments.”

Miami took advantage of a wild first quarter to build a 34-30 lead, then turned the game with James taking control in a 12-point second quarter.

He scored half of the points in an 8-2 run that gave the Heat what was then their biggest lead of the series, 42-32. A few minutes later, James did it again, making a 15-footer with 1.3 seconds left in the half to give Miami a 70-56 halftime lead and the franchise first-half scoring record.