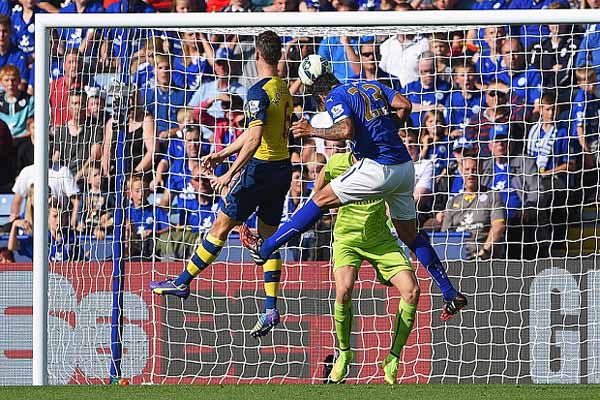 Twelve months ago, frustrated Arsenal supporters chanted “spend some f------ money”. Wenger obliged by splashing the cash on Mesut Özil and also spent big on Alexis Sánchez this summer. But the Arsenal fans who travelled to the King Power Stadium clearly still believe Wenger has work to do during the final 24 hours of this transfer window. Having watched the free transfer Yaya Sanogo fail to offer any encouragement that he can effectively step in for the injured Olivier Giroud, Arsenal fans chanted “sign a f------ striker”. Wenger warned that there was not always a “miracle man” out there who can win games on his own. But it looks like Sanogo needs a miracle to become a goal threat in the Premier League. Arsenal hold an interest in the Swansea City striker Wilfried Bony, who has a release clause set at £19 million. Radamel Falcao has been offered to clubs around Europe, but Wenger has avoided questions over whether or not Arsenal could meet his £20 million loan fee or Monaco’s £55 million asking price for a permanent transfer.

“Every time you don’t win a game the solution is to buy somebody,” Wenger said. “We are out there trying our best and you have to trust us to find the best possible solution. But as well, every time you don’t win a game, not to think there is a miracle man out there to win the game on his own. Why didn’t Manchester City win against Stoke? They have plenty of strikers. Football is not an individual sport.”

Arsenal’s call on Loïc Rémy was made too late to stop him joining Chelsea, but Wenger hinted that he had at least one more iron in the fire. Asked on the likelihood of him signing a striker, Wenger replied: “I don’t know because it doesn’t depend only on me. I don’t know what happened in the last two hours. Even when we have Giroud you asked me the same question. It’s a recurrence, as long as the transfer market is open, to make everybody dream by thinking the solution is always somewhere but it’s not necessarily obvious.

“Do we have unlimited money? No, because that’s not the way we manage the club. We try always to make the right decision. We have resources if we think it’s the right player.”

Sanogo inadvertently helped to create the opening goal for Sánchez by mis-hitting a lofted pass from Santi Cazorla straight at the Leicester City goalkeeper Kasper Schmeichel. Fortunately for Arsenal, the ball fell to Sánchez, who scored his first Premier League goal. It was charitable of Alexis to run to Sanogo in celebration as though he had provided the assist, but it did not help the performance of the 21-year-old who is yet to score in a competitive match.

After being sent through on goal by Nacho Monreal, Sanogo failed to steer the ball around Schmeichel and he headed harmlessly over the bar from a Cazorla cross. It was a mark of Sanogo’s confidence that he chose to dummy Özil’s ball into the box, rather than attempting a shot.

Wenger finally put Sanogo out of his misery with 13 minutes remaining by replacing him with a forward he was preparing to sell a week ago, Lukas Podolski. “You have been 21 and you have certainly played football,” Wenger said. “If you play up front and you don’t score it’s very quickly a problem. I don’t think that problem will last very long. But when you have a chance to play for Arsenal, and you don’t score, it’s a problem for you. He did find it very hard today, and you can say he didn’t score, yes, is it on his mind, of course, he’s a striker. He scored many goals as a young player.”

Other than trying to find a striker, Wenger’s need for defensive reinforce­ments was underlined when Laurent Koscielny suffered a clash of heads with Jeff Schlupp. Koscielny received treatment on the pitch and then went back to the dressing-room to be fitted with a blue protective cap to hold his bandage in place, before re-entering the action in the 18th minute.

After Sánchez had given Arsenal the lead, however, it was clear Koscielny was still suffering as he lost Leonardo Ulloa in the penalty area and the Argentine headed Schlupp’s left-wing cross past Wojciech Szczesny. Shortly afterwards, Koscielny was replaced by Calum Chambers.

“I was told by our medical team that he was not badly injured and could be back after two minutes with two clips on his head,” Wenger said. “After that he asked to come off. He continued to bleed and didn’t feel comfortable. He was not concussed.”

Ulloa, an £8 million signing from Brighton, could have secured all three points for Leicester in the second half, but he shot into the side-netting after collecting a pass from Riyad Mahrez.

Arsenal have held talks with Borussia Dortmund over the Greek defender Sokratis Papastathopoulos, but the fact the two clubs have been drawn in the same Champions League group has complicated negotiations.

Alex Oxlade-Chamberlain picked up a knock and will have to be assessed ahead of England’s friendly against Norway on Wednesday.” Wenger said. “We had Özil with ankle, Chamberlain with [his] calf.”