'Jamaica stand up, this is for you my people' 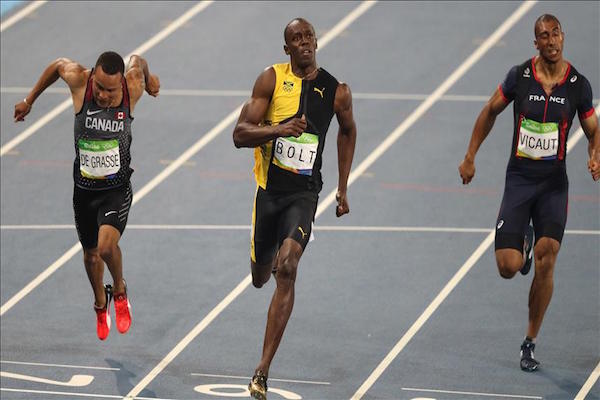 The fastest man on Earth proved it once again he is deserving of the title by becoming the only person ever to win the 100m at the Olympics three straight times.

Bolt’s victory was far from certain after he injured his hamstring and had to pull out of Jamaica’s trials last month. “Jamaica stand up!!! This is for you my people,” he tweeted immediately after the race. He has two more races to go before his is finished in Rio.

A world record was set in the men’s 400m finals as South African Wayde van Niekerk finished in a time of 43.03 from the outside lane. Van Niekerk crossed the finish line ahead of 2012 London Games gold medalist Kirani James of Grenada who took silver and LaShawn Merritt of the U.S. won bronze.

The win, which gave Kenya its first gold in Rio, comes after Sumgong won the 2015 world championships.

The race also featured the Luik sisters from Estonia. It was the first time triplets have ever competed in a single Olympic event.

Olympic Games produce upsets but this one in wrestling is one of the biggest ever. Seven-time world champion Hamid Soryan of Iran was beaten 4-5 by Japanese Shinobu Ota in the opening match of the Greco-Roman bout. It was the second straight loss for Soryan in an international competition.

Klay Thompson made seven three-pointers to help the U.S. squeak by France 100-97 in their final group stage game before the quarterfinals round. Thompson ended the game with 30 points and the win puts the favorite U.S. team three victories from the gold.

The American women had a much easier time defeating China 105-62 in their basketball game. The team has won all five games it has played in Rio by an average of more than 40 points.

A silver medal in the 3m platform diving competition was not the only piece of hardware Chinese diver He Zi received. Her boyfriend proposed after she accepted her medal. Qin Kai who is also a diver on the Chinese team got down on one knee and proposed. Zi said yes.

Gold medalist Ryan Lochte was robbed at gunpoint Saturday night, a claim Olympics organizers initially denied. But the American swimmer’s mother confirmed the story to international media about her son and three teammates. “I think they’re all shaken up,” she said and that the perpetrators “just took wallets and basically that was it.” An International Olympic Committee spokesman denied the athletes were robbed but the committee later said the denial “is not correct.”

And organizers say security officials detonated a suspicious package outside of the sailing venue at Marina da Gloria.