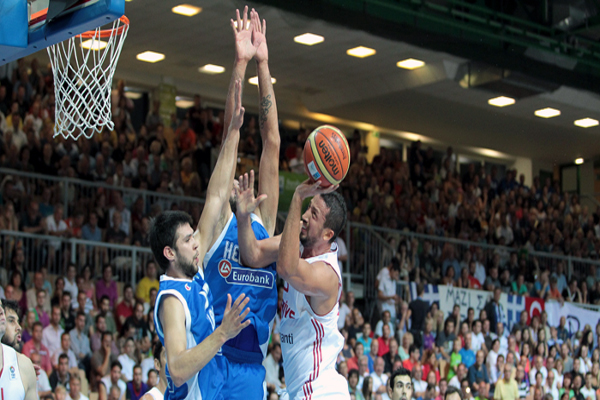 Turkey lost its third game at 2013 EuroBasket in decisive fashion against a resplendent Greece on Sept. 7, 81-64, scuttling any hopes the Turks entertained of reaching the second round. Failing to measure up against one of the main favorites in the competition, the self-proclaimed “12 Giant Men” looked rather like Lilliputians on the hard court against a Greek team deprived from its virtuoso playmaker, Vassilis Spanoulis.  Despite missing arguably their best player, the Greeks were superior in all aspects of the game, dominating until the final buzzer, particularly thanks to an unstoppable Yannis Borousis, who led his team with 21 points and a remarkable 80 percent shooting. At the other end of the spectrum was Turkey’s NBA veteran Hidayet “Hedo” Turkoğlu, who went 0-for-9 in shooting in another miserable day at the office.  The Greeks hammered Turkey with 10 three-pointers while Bogdan Tanjevic’s men missed 13 of their 17 attempts from outside the arc. Turkey managed to resist during the first half, keeping the gap below 10 points thanks to the efforts of Kerem Gönlüm and Ömer Aşık. The Greeks, however, used a 14-6 run in the third period to build a 59-46 lead before comfortably sauntering to victory in the final quarter. Kostas Sloukas assisted Borousis with 14 points, while Stratos Perperoglou added 12 points and Kostas Papaloukas dished in another 11. Nikos Zizis made up for the missing Spanoulis with 11 assists.

After losing all hope of surviving in the competition, Turkey will try and find some consolation with a win against Sweden. But the Scandinavians, who came into the tournament as minnows, registered the biggest shock of the competition so far by beating heavily favored Russia 81-62 earlier today.

Italy defeated Finland 62-44 in the group’s other game.