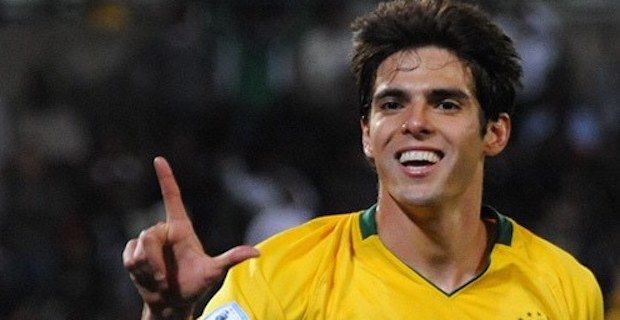 Football superstars Ricardo Kaka and Luis Figo arrived in Pakistan on Thursday to officially kick off the World Soccer Stars series 2019 to be played in April.

The Real Madrid stars landed at the Jinnah International Airport in Karachi on a day-long visit via a chartered plane from the UAE and then proceeded to northeastern Lahore city after a brief stay.

Two matches will be played between the two teams comprising former and current international stars and local footballers in Karachi and Lahore in April. Kaka and Figo will lead their respective teams.

Footage aired on local broadcaster Geo News showed Kaka and Figo -- both attired in white sports shirts and caps -- flashing victory signs as they were welcomed by the local officials and football fans at the airport.

The two were presented traditional Ajrak -- a printed shawl -- and cap. They were later taken to the hotel in tight security where they addressed a news conference.

“We are here for football development. This country has a huge potential waiting to emerge into the international scene,” Figo said while addressing the news conference.

“I advise the youngsters who want to pursue football as a career to work hard to achieve your target. You must take advantage of this event,” he added.

When asked to comment on the Federation of International Football Associations (FIFA) decision to increase the number of teams from 32 to 48 for the next world cup, Figo said: "More teams mean more opportunities for football playing nations to participate in the World Cup. It will also generate more money for the development of the sport. But In terms of quality, I don’t know it is better or not, but let’s try first."

Replying to the same question, Kaka, who retired from international football in 2017, said: "We have to try. It will work or not, we will see. More people (teams) mean more money. I think it is a good opportunity for more countries to be part of the event”.

The Portuguese and Brazilian stars are scheduled to train the young footballers, in addition to playing the two-match series, during their five-day stay in Karachi and Lahore.

Pakistan is among those countries in the world who suffered the most from terrorism. The attack on the Sri Lankan cricket team in 2009 badly damaged and halted international cricket in the country.

Football is a popular sport in otherwise a cricket-frenzy Pakistan.

Keywords:
Football Legends KakaFigo
Your comment has been forwarded to the administrator for approval.×
Warning! Will constitute a criminal offense, illegal, threatening, offensive, insulting and swearing, derogatory, defamatory, vulgar, pornographic, indecent, personality rights, damaging or similar nature in the nature of all kinds of financial content, legal, criminal and administrative responsibility for the content of the sender member / members are belong.
Related News