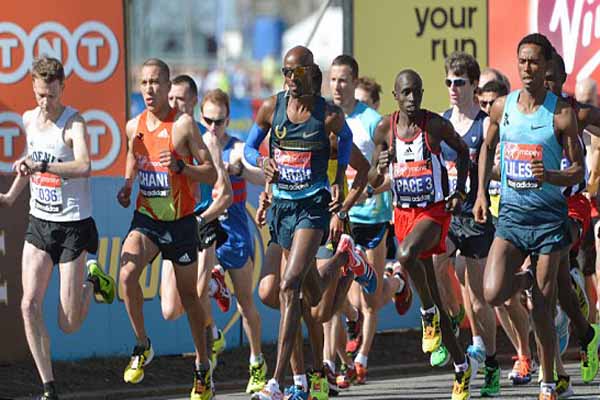 Kebede overhauled Kenyan course record-holder Emmanuel Mutai in the race's final stages, with Ayele  Abshero of Ethiopia finishing third. Jeptoo, the silver medallist at last year's London Olympics, claimed victory in a time of 2hr 20min 13 sec, with compatriot Edna Kiplagat second and Yukiko Akaba of Japan taking third place. The London Marathon takes place Sunday amid a heightened police presence following the Boston Marathon bomb attacks, with the 36,000 runners observing a 30-second silence to remember victims. A sombre 30-second period of silence was observed ahead of the start of the elite men's and mass races at 10:00 (0900 GMT) in Greenwich Park on the south bank of the River Thames. Scotland Yard police headquarters decided to boost the number of officers by 40 percent -- no numbers have been given -- following the Boston attacks on Monday. They hope the reinforced security along the route will reassure the 36,000 runners and tens of thousands of spectators. Prince Harry, third in line to the throne, is set to present the medals. His office said they have not been notified of any changes to the plan following the Boston bombings. Runners have been encouraged to wear black ribbons and organisers have announced that 2 ($3, 2.30 euros) for every finisher will be donated to a fund for victims of the Boston attacks.

With more than 36,000 runners taking part and most expected to finish, they expect to arise around 70,000.

"We want to show our support for our friends and colleagues in Boston at this difficult time for the global running community," said race director Hugh Brasher.

"We are determined to deliver an amazing event that will focus on one of the core pillars of the London Marathon, which is to have fun and provide some happiness and a sense of achievement in a troubled world." US police on Friday captured an ethnic Chechen man suspected of staging the Boston bombings with his brother, after a manhunt that virtually paralysed the city and its suburbs.