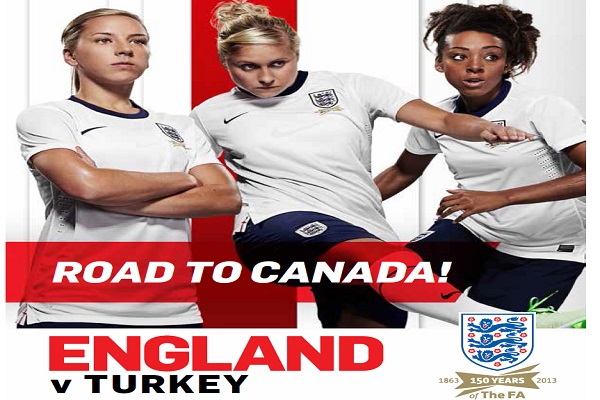 England last met Turkey in qualifying for the 2011 FIFA Women's World Cup, winning both matches 3-0. The home game, in July 2010, was Rachel Yankey’s 100th international appearance and she captained the side, and scored, on her big day.

It is the second game to be played on the south coast in five days, as The Three Lions will open their FIFA Women’s World Cup™ 2015 Qualifying campaign against Belarus at the Goldsands Stadium, home of AFC Bournemouth, on Saturday 21st September (Kick Off 1pm).

Tickets are now on sale at Fratton Park to what promises to be a thrilling match, as England aim to make it to their third successive World Cup Finals in Canada 2015. They have been pitched in Group 6 alongside Ukraine, Belarus, Wales, Turkey and Montenegro.

And to help mark a special year for the Football Association - the 150th anniversary and 20 years since it took over the running of the women’s game, there is a series of special priced tickets to allow football fans in the south, the chance to experience top class women’s football. Portsmouth FC season ticket holders and Armed Forces can attend for £2.50 and group bookings of at least 15 people can purchase a ticket for as little as £1.50. And with a family ticket costing only £10, football fans can enjoy an evening of international football at an affordable price, right on their doorstep.

A memorable match to be held in Portsmouth was a 3-0 victory over Portugal on 24 February 2002. Kelly Smith scored two and Fara Williams grabbed the other in front of a then record crowd of over 8,000.  The players are hoping that once again sports fans across the south will come out with England flags waving and make sure it is a roaring success.

Portsmouth FC’s engagement manager Micah Hall said: “We are both honoured and delighted to be hosting this Women’s World Cup qualifier here at Pompey. We have had a fantastic turn out when England Women have played here and we are hoping that once again Portsmouth and football fans across the south, will come and join us for this prestigious event.”

Prior to seeing the two teams in action, fans are invited to take part in FREE, fun football based interactive games, supported by Continental Tyres. Games include batak boards, a speed cage, a target shoot inflatable plus a new trailer which houses digital stations and the FA WSL, Cyprus Cup and the FA Girls’ Youth Cup. To add to the enhanced fan experience, there will also be hair braiding and face painting, all of which will take place outside the stadium from 5pm.

Adult and concession tickets can be purchased online 24 hours a day at www.eticketing.co.uk/portsmouth (Season ticket holders, Armed Forces, Group and family tickets can only be purchased via the phone)