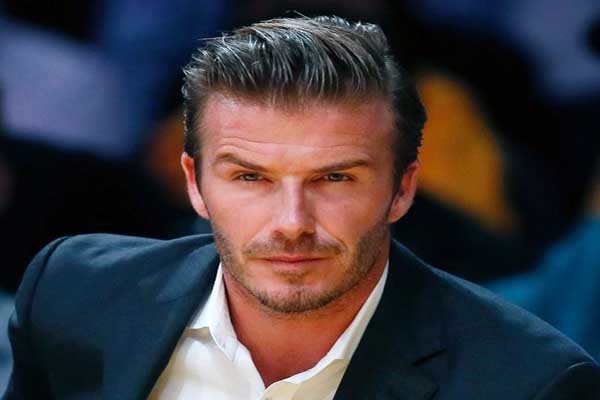 The former England captain made 115 appearances for his country and 394 for Manchester United, winning six Premier League titles and the Champions League. Beckham, 38, signed a five-month deal at Paris St-Germain in January.  "I'm thankful to PSG for giving me the opportunity to continue but I feel now is the right time to finish my career, playing at the highest level," he said.  PSG have two more games before the end of the season, at home against Brest on Saturday and away to Lorient on 26 May.  Beckham, who donates his salary with the newly crowned French champions to charity, has made 13 appearances since moving to Paris.  The Leytonstone, east London-born midfielder has played for United, Real Madrid, Los Angeles Galaxy, AC Milan and PSG, lifting 19 trophies including 10 league titles.  He is the only English player to win championships in four countries.

"If you had told me as a young boy I would have played for and won trophies with my boyhood club Manchester United, proudly captained and played for my country over 100 times and lined up for some of the biggest clubs in the world, I would have told you it was a fantasy," he said.

"I'm fortunate to have realised those dreams."

Beckham joined United as a trainee in 1991, making his first-team debut the following year and signing his first professional contract in 1993.

He became one of the world's most high-profile sportsmen during his time at Old Trafford - and a global celebrity following his marriage to Spice Girl Victoria Adams in 1999.

Then came a move to Real Madrid in 2003 with whom Beckham won a La Liga title in 2007 before switching to the United States with LA Galaxy.

He was loaned to AC Milan during the MLS off-season in 2009 and 2010, and his stay in the US ended when he signed for PSG.

"To this day, one of my proudest achievements is captaining my country. I knew every time I wore the Three Lions shirt, I was not only following in a long line of great players, I was also representing every fan that cared passionately about their country," he said.

Beckham was the first English player to score at three consecutive World Cup finals and has the joint-second most goal assists in European Championship finals history.

He played a significant role in the successful bid to bring the 2012 Olympic Games to London and in March of this year became the first sportsman from outside of China to be invited to become the ambassador for the sport in the country.

"Nothing will ever completely replace playing the game I love," added Beckham. "However, I feel like I'm starting a new adventure and I'm genuinely excited about what lies ahead.

"I'm fortunate to have been given many opportunities throughout my career and now I feel it's my time to give back."

UK Prime Minister David Cameron said: "David Beckham has been an outstanding footballer throughout his career.

"Not only that - he has been a brilliant ambassador for this country, not least if we remember all the work he did in helping us win London 2012."

England manager Roy Hodgson added: "He's had a glittering career, iconic status, and I wish him well in the future."

Beckham concluded his statement by thanking his family.

"I wouldn't have achieved what I have done today without my family. I'm grateful for my parents' sacrifice, which made me realise my dreams," he said.

"I owe everything to Victoria and the kids, who have given me the inspiration and support to play at the highest level for such a long period."