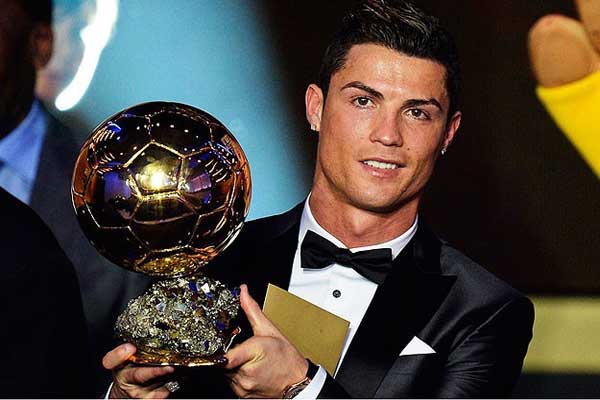 The Portugal and Real Madrid forward was so overcome with emotion he could barely complete his acceptance speech.

"First of all, I have to say a great thanks to all of my team mates with the club and the national team," Ronaldo said as he cried after accepting his prize.

"Without all of their efforts this would not have been possible. I am very happy, it is very difficult to win this award.

Argentine Messi, hampered by injury problems at Barcelona late in the year, finished second in the poll, officially known as the FIFA Ballon d'Or. Frenchman Franck Ribery was third.

Jupp Heynckes, now retired, was named coach of the year for the first time after his Bayern Munich team won an unprecedented Champions League, Bundesliga and German Cup treble.

Ronaldo secured the title with 1,365 points, ahead of Lionel Messi with 1,205 points and Franck Ribery with 1,127 points.

The votes are held by the captains and coaches of the 209 national teams, although FIFA said that only 184 of them took part in the poll, plus 173 selected media representatives.

Ronaldo was also voted FIFA Player of the Year in 2008, before Messi began a run of four successive titles.

In 2010 and 2011, the award was fused with the Ballon D'Or award previously handed out by France Football magazine.

Although Ronaldo did not win any major titles last season, he has been unable to stop scoring goals.

The 28-year-old has 20 La Liga goals this season for Real Madrid and netted a record nine times in the Champions League group stage.

The high point of his year, however, came with Portugal when he scored a stunning hat-trick and almost single-handedly beat Sweden 3-2 in the second leg of their World Cup playoff tie to send his country through to the finals.

Joining Ronaldo in the team of the year were Manuel Neuer in goal, Philipp Lahm, Sergio Ramos, Thiago Silva and Dani Alves in defence, midfielders Andres Iniesta, Xavi and Ribery with Zlatan Ibrahimovic and Messi in attack.

The Afghanistan Football Federation won the Fair Play award after hosting their first international match at home, a friendly against Pakistan, for 10 years in August.

Ibrahimovic was judged to have scored the best goal of the year, an amazing overhead kick from near the touchline in a friendly against England.

Germany goalkeeper Nadine Angerer was named the women's Player of the Year.

Former Brazil striker Pele was given a special "Prix d'Honneur" for his lifetime achievements.