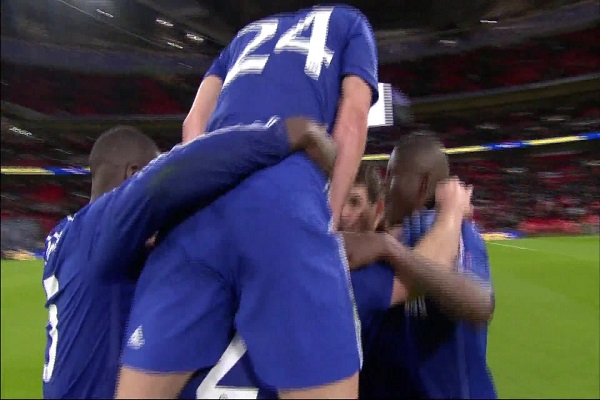 Tottenham had already hit the crossbar through Christian Eriksen, but Chelsea doubled their lead just after the break when Diego Costa's shot was turned in by the leg of Kyle Walker.

Spurs pushed hard to find a way back in late on but Chelsea closed out the match to gain revenge for the 2008 final defeat to their London rivals and clinch a first trophy for manager Jose Mourinho since his return to Stamford Bridge.

With Nemanja Matic suspended, Mourinho made a surprising team selection that included Gary Cahill – one of four changes – alongside John Terry in defence, with Kurt Zouma moving into midfield.

However, it appeared to put the Blues out of sorts in the opening half and Tottenham looked capable of breaking the deadlock.

Blues captain John Terry gave his side a first-half lead when Willian's free-kick dropped loose inside the box and he fired home via a deflection.

Spurs, complete with seven changes to the side knocked out of the Europa League by Fiorentina on Thursday, had their best chance after 10 minutes when Harry Kane's trickery won a free-kick in a dangerous area and Eriksen rattled the woodwork from the set piece.