Gerrard nearly gave Liverpool the lead eight minutes later, but his left-footed effort from inside the area hit the post and went wide. Sterling then held the ball up superbly for substitute Lallana, 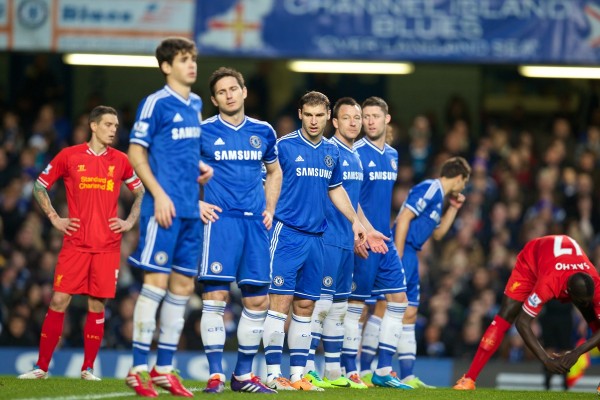 Sterling equalised on the hour with a superb run and finish, firing past Thibaut Courtois from just inside the area after shrugging off Nemanja Matic. Chelsea took the lead on 18 minutes after Emre Can brought down Eden Hazard in the area, before the Belgian dusted himself off to slot the penalty past compatriot Simon Mignolet.

Steven Gerrard hit the post and Adam Lallana forced a fine save from Courtois as Liverpool desperately searched for a winner to take a lead to Stamford Bridge for the second leg, but the hosts had to settle for a draw. Liverpool had all the possession in the opening exchanges, but only tested Courtois in the Chelsea goal once, the Belgian forced into an acrobatic save from Gerrard’s long-range effort.

A minute later, the visitors went up the other end through Cesc Fabregas, who cleverly found Hazard before the Chelsea man was clumsily clipped by Can. Hazard stepped up to send Mignolet the wrong way for his 12th goal of the season. There were strong appeals for a Liverpool penalty just before half-time, but referee Martin Atkinson waved play on as the ball struck Diego Costa’s hand as he lay on the ground inside the box. Sterling’s superb equaliser added to an already electric atmosphere inside Anfield. The England international picked the ball up midway inside Chelsea’s half, before running past Matic and finishing low to Courtois’ left with Gary Cahill closing in.

Brendan Rodgers: We deserved a win

Gerrard nearly gave Liverpool the lead eight minutes later, but his left-footed effort from inside the area hit the post and went wide. Sterling then held the ball up superbly for substitute Lallana, who forced Courtois into a fine save to his right with a 25-yard volley as Liverpool continued to dominate. The Reds pressed hard for a winner, but were cut out time and again by a resolute Chelsea, who registered only two attempts on goal in the 90 minutes.

The two sides meet for the return leg at Stamford Bridge on January 27.