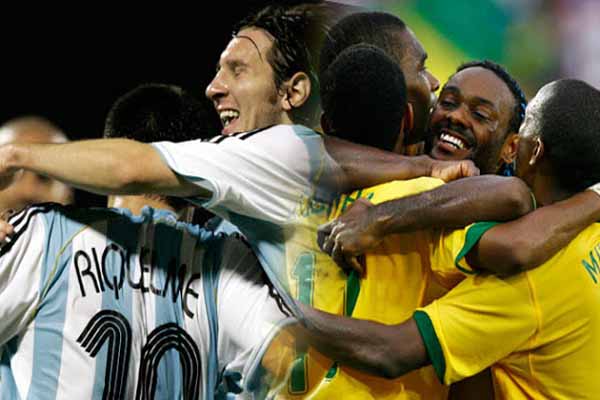 Considering they were playing a quarterfinal World Cup match against Argentina, Belgium got surprisingly little attention amongst the crowds outside Brasilia’s Mane Garrincha stadium on Saturday. That is, of course, unless it was being used as a pawn in a rather more ancient and storied rivalry. “Today, I supported Belgium,” said Brazilian Anna Ximenes, a 35-year-old dentist from Brasilia. Why? "I hate Argentina. It’s that simple.”  Brazilians in the stands spent much of today’s game, which ended 1 – 0 to Argentina, singing traditional Brazilian football songs, and cheering on Belgium -- just as they have with every team that Argentina has faced. Argentines retaliated with a new chant, invented for this World Cup.
"Brasil, decime que se siente, tener en casa tu papa?” they taunted, which translates roughly as “Brazil, how does it feel to be bossed around in your own home?”
The Brazil -- Argentina rivalry is perhaps the longest and most intense there is. The sport became popular in both countries in the early 20th century, and at that time, Argentina was the most developed and economically powerful country in South America. Brazil was still poor and largely undeveloped, but on the football field, at least, it could compete. A rivalry was born. With five World Cup trophies to Argentina’s two, Brazil is the more successful team. But both teams have had their share of superstars, including Argentina’s Maradona and Messi, and Brazil’s Pele and Neymar, amongst others. The Brazilian government estimates that some 100,000 Argentine fans have crossed the border into Brazil for the World Cup, and some Brazilians have feared the “Argentine Invasion,” as it has been dubbed, for more than just incendiary songs. “I’m Brazilian, and it’s in my blood to hate Argentines. They are crazy tourists in our country, they invade Maracana, they get in fights,” said Alexis Risden, 24, an intern at a technology company. “I’m sad Belgium lost.” The Argentine fans are some of the most passionate, and rowdiest, in the world, and that has at time spilled over into violence, particularly amongst small groups of hooligans called “Barras Bravas.” Brazil’s border authorities have been sharing information with Argentina and Interpol to try to prevent known members of these groups from entering the country.
Throughout the tournament, fans of both teams have fantasized about a Brazil-Argentina final -- because of the two teams’ positions in the World Cup brackets, the climax of the tournament is the only game in which they could possibly meet.
“It is like a dream to beat Brazil in their country, on their own fields. They are our eternal rivals,” said Santiago Arnaud, from Buenos Aires. “I like the country, they are happy, good people. But in football? They are the worst.”
An Argentina-Brazil final is now one step closer, with both teams through to the semi-finals. And to add tension, following yesterday’s foul-filled game against Colombia, which saw Neymar stretchered off the pitch with a fractured vertebrae, Brazil fans could be facing their number one rivals without their star goal-scorer.
“We will still win,” said Naiara Ulhoa, 31, a public servant from Brasilia.
And if not?
“It would be a nightmare,” she said. “If Argentina won here, on Brazilian soil? We would have to endure them talking about it for the rest of our lives.”