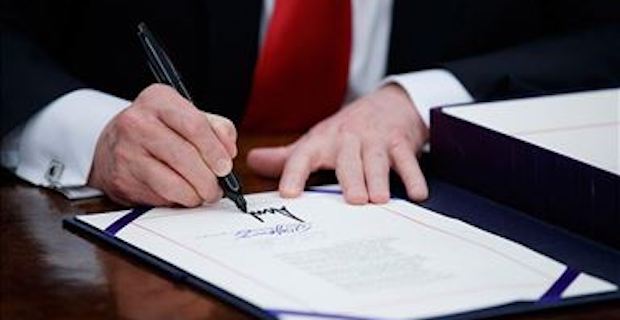 President Donald Trump issued an executive order Monday freezing all assets in the U.S. belonging to the Venezuelan government in a significant escalation of tensions with Caracas. Trump's order further prohibits all transactions with Venezuelan officials but exempts humanitarian assistance to Venezuela, including transactions related to the provision of food, clothing and medicine.

There is also an exemption for official U.S. federal government business.

"I have determined that it is necessary to block the property of the Government of Venezuela in light of the continued usurpation of power by the illegitimate Nicolas Maduro regime as well as the regime's human rights abuses, arbitrary arrest and detention of Venezuelan citizens, curtailment of free press and ongoing attempts to undermine Interim President Juan Guaido of Venezuela," Trump wrote in a letter to Congress, referring to the opposition leader whom Washington has backed in a power struggle with Venezuelan President Nicolas Maduro.

The Trump administration has been focusing on economic and diplomatic measures against Maduro, including imposing sanctions on him, his top officials and several governmental departments as it seeks to ramp up pressure on him to step down.

Venezuela has been rocked by political unrest since Jan. 10, when Maduro was sworn in for a second term following a vote boycotted by the opposition.

Tensions climbed on Jan. 23 when Guaido declared himself interim president, but Maduro has so far refused calls to step down.

He has instead accused the U.S. of orchestrating a coup against his government, saying he is open to dialogue with the opposition.

Nearly 5,000 people leave Venezuela every day because of "instability and uncertainty" amid a crisis over the presidency and economy, and 3 million Venezuelans have already left the country since 2015, according to the UN's refugee agency.

Keywords:
President Donald TrumpVenezuelan Government
Your comment has been forwarded to the administrator for approval.×
Warning! Will constitute a criminal offense, illegal, threatening, offensive, insulting and swearing, derogatory, defamatory, vulgar, pornographic, indecent, personality rights, damaging or similar nature in the nature of all kinds of financial content, legal, criminal and administrative responsibility for the content of the sender member / members are belong.
Related News