Two birds with one stone 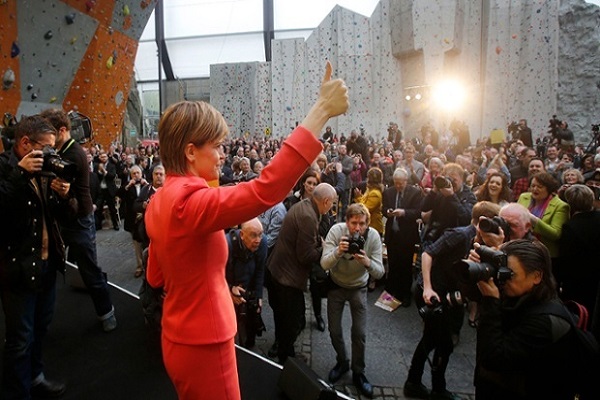 Two birds with one stone. By choosing the cavernous, Bond-like setting of the Edinburgh International Climbing Arena as the venue for its election manifesto launch, the SNP was happy to let the medium be the message. Large posters outside the centre advertised “Embrace the fear: aerial assault”. We now know both that the SNP come in peace and how they will arrive. Helicopters at dawn.

Except this wasn’t really a manifesto launch. Nor was it even a political rally. It was the coronation of Queen Nicola. When the warm-up music faded, Stewart Hosie , deputy leader of the SNP, took to the stage to acknowledge the applause. He held his hands up for several moments in a “Shucks, guys, it’s been lovely, you can stop now” before realising that the applause was only getting louder and none of it was for him.

Nicola Sturgeon has learned a thing or two about working the red carpet in recent months, and she was still on the stairs some 50 metres away. She gave a wave that struck the perfect balance of coyness and majesty – Princess Di in her prime – and then walked, ever so slowly, towards the platform. Long before she got there Hosie was suffering from rigor mortis.